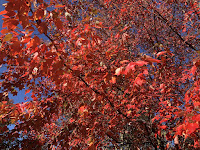 It’s been a few years since we had colors this spectacular. Last year was all dull browns and yellows, but this year the reds broke out in full force again. 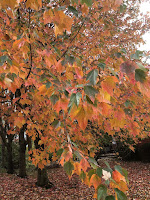 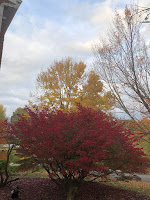 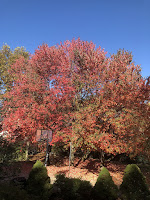 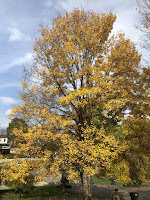 Posted by Sujatha at 2:31 PM No comments:


Quietly, the chill creeps into the air. The sunrise seems to get later with each passing day. Garden plants start yellowing, the maples start to change color...

No, summer isn’t quite gone yet. It’s still lingering in the small vegetables and bountiful cherry tomatoes that are still coming to the kitchen every other day or so. It’s still there in the bursts of warmish bright sunny days with brilliant blue skies.

But autumn is hard on summer’s heel.

The little groundhog has bulked up over the summer. We have finally achieved a peaceful detente with it, as it confined its meals to assorted weeds in our yard, and those in the Boo Radley-esque neighbor’s yard. It hasn’t tried digging into the vegetable patch yet, so far, so good. It lumbered onto the deck today, to grab an acorn snack, something that it rarely does.

(I had hoped to include a little video, but Blogger is giving me trouble, so maybe another time) 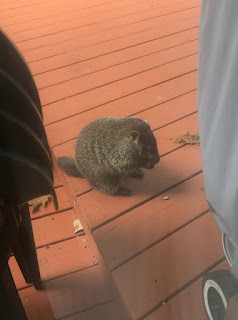 The spot near the vegetable garden had been cleared a few months back by the neighbor’s landscaping guys. But Nature has rebounded in that patch. This year there are some spectacularly beautiful goldenrod spikes waving above the other weedy bushes, great cover for all the birds there. 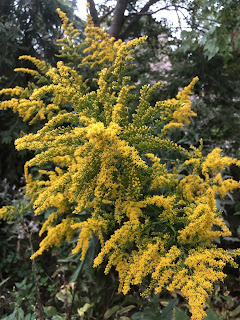 A week ago, the newspaper was talking about thousands of birds flying over the region, and asked us to keep an eye out for them. But like many such alerts, nothing came of it that day or the next.

Today we were treated to a large group of grackles flying south, as they paused for a roadstop on their journey. They spread out over the lawns around us, I would estimate a group of a few hundred birds. They pecked at the lawn, a few flew on to the branches of trees. As I opened the squeaky screen door, a few took off from our lawn, creating a momentary haze of beating wings and black silhouettes.

(And, that's why they say a picture is worth a thousand words, this being unable to post video is really annoying...) 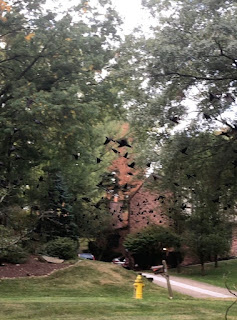 Highway in the Backyard

We have a low deck, positioned about two to three feet off the uneven ground from whatever was left of backfill after our house was constructed, back in the early '70s.

It's a good deck, sturdy, painted and repainted many times over the years, with an oak tree towering over it at end, making it a lovely shaded haven even on the hottest summer day.

Underneath the deck, it's a different story. The soil seems hard and dry, with miscellaneous pieces of rock and broken concrete scattered where the view penetrates into the gloom. It's a mysterious, unknowable zone, I always thought.

The groundhog makes it home in a burrow there,it usually waddles in and out at various points around the deck. I had taken to spraying the entrance points with peppermint oil, hoping to discourage the groundhog from settling there, and potentially ravaging our garden.

Then, just a couple of days ago, on a cloudy cool afternoon, I saw a raccoon emerging from under the deck, padding away carefully at first, then going on a full fledged dash towards the neighbor's yard. What could it have been doing there? Acorns, I think, were the big attraction of the season.

Yesterday, the rabbit was back near the far end of the deck, close to where I had attempted to block an entrance with a flower pot. It scooted under the deck the moment the screen door squeaked as I opened it.

Same with a small set of chipmunks.

So, there you have it- a critter highway under the deck, not burrows for the groundhog as I thought. This one plays host to a variety of creatures who visit it at various times of the year for food, shelter, or just as a convenient way to get somewhere without running into clueless humans.

Posted by Sujatha at 3:31 PM No comments:

"Green green, it's green they say
On the far side of the hill.
Green green, I'm goin' away
Where the grass is greener still.."   (New Christy Minstrels, 1963)

An old song that comes to mind from a chorus group that I sang with when I was in grade school. But this post isn’t really about the song, it’s just a catchy tune that ear wormed itself into my brain.

First, the green worm. I was on my usual morning walk, pretty close to home when I saw this bright green charmer with two almost fluorescent yellow stripes on the back. I took the chance and bent down to take a short video of this little beauty, a cabbage worm that hopefully makes it to butterflyhood some day soon. It pushed determinedly along the road for some time, before moving to the grass.

Then, there were the metallic green sweat bees or augochlorini, sparkling iridescent in the sunlight as they buzzed around the mint flowers in my garden. Tiny as they are, it’s fascinating to watch them as they industriously collect the nectar from the delicate lavender colored flowers.

Having ample opportunity to watch the birds at the feeder this year, with all the working from home...

The other day, a blue jay lay flat, unmoving, wings spread out under the now faded peony plant. I was alarmed, was it injured or dead? Should I go out to see what had happened. Near it stood another blue jay. In the space of less than a minute, the prone blue jay stood up sprightly, and the other one took its place in the same weird wings-spread-out pose. What on earth were they doing? The whole sequence may have lasted just a couple of minutes.

Heigh ho, heigh ho, it's off to Google we go.

This behavior, not unique to blue jays, is called 'Anting'. It's thought that the birds locate areas where there are ants, spread down with their chests and wings to collect the ants, and later eat them. Some scientists  believe that it is helpful to the birds in that the formic acid released by the ants helps the birds 'self disinfect' of parasites. Other scientists think that it is more likely that the release of formic acid from the ants renders them more delicious to the birds which pick at and eat the ants.

Then, on a walk in another neighborhood, I witnessed a Flicker fight. It wasn't obvious from the markings whether these were two males or females fighting, but I did manage to capture a few seconds of video where the interloper was chased off by the attacked bird. At least, till I became the intruder and the birds flew off to the safety of different trees.