Yesterday was another unremarkable repeat of the recent biking and walking expeditions we have been doing practically every weekend.
Bikes and bike helmets: Check
Baseball caps: Check
Water bottles: Check
Lemon rice, curd rice, mango pickle, jalapeno chips: Check
Ladles and picnicware: Check
Groggy kids: Check
So off we drove onto PA-43, the toll road (cheap at 50 cents a pop) from and to Heaven, on our way to Cedar Creek State Park.

The weather was perfect- gorgeous blue skies and enormous powder-puff white clouds, greenery shading the sides of the bike trail. I walked behind M who still struggles with training wheels, whil 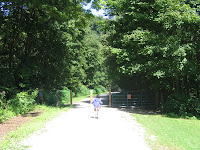 e the others went far ahead of us. We stopped occasionally to admire the wildflowers and had a couple of butterflies following us, convinced from the bright yellow I wore and M's pale purple that we were a mother-lode of nectar. One landed on M's capris and stuck out an exploratory proboscis, only to be disappointed. It flew away into the bushes afterwards.

After about an hour, I returned with M to a spot close to the creek, snagging a partly broken picnic table that nobody seemed desperate enough to want, all better spots having already been taken by early bird picnickers. It was shady and cool as we waited for the others in our party to arrive from their biking and walking.

"I'm bored", M started on her usual whine. "When will the others come here."
Suddenly, "Look, Amma! A groundhog!"
There it was, a smallish groundhog venturing out into the grass about 4 feet away from where we sat. It seemed mesmerized by something in the distance, which turned out to be the curlicues and swirls of RC airplanes flying high in a nearby field. After munching a bit on some clover, it retired into the bushes again.

I took a trip to the van to retrieve the picnic food and tablecloth, leaving M with my parents, in charge of the table. After setting up the table, as we started to eat our food, the groundhog ventured out again. This time it set a direct course for me, as I chowed down on lemo 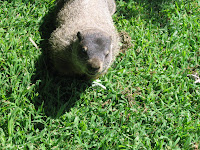 n rice and jalapeno chips. I set aside the plate and snapped a few shots of the advancing groundhog, which moved forward, unfazed by the flashing bulb. What a pro! Angelina Jolie must have nothing on this one, in terms of paparazzi friendliness, I thought.

Now, he was too close, and I started getting antsy. I stomped on the ground, and he ran away into the bushes, only to venture out on his quest again as I resumed eating.
'Let's try throwing him a chip', M shouted.
'No, we shouldn't be feeding it. It's a wild animal."
By this time, the rest of the party had arrived, and the groundhog vanished into the bushes again. We thought that he had gone away for good, till we noticed that he had sneaked up on us from the 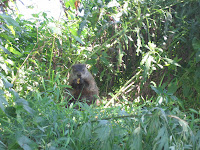 other side, hidden among the Queen Anne's lace and thistles.
The kids were all excited. "Here's a chip, groundhog!". Our remonstrations went unheeded as they tossed chips in his direction. He rooted around, picked out a chip and sat up munching it delicately, while I grabbed my camera and started clicking away like mad, again. He posed gladly for my benefit, quite the seasoned model.
He went through a fair amount (I'd say about half a bagful) of the jalapeno chips before delicately licking his paws and deciding it was time for a goodly siesta.
On the way back, M and S had a discussion about the whole trip and decided that the groundhog was the best part, and deserving of a name to rival that of Punxsutawney Phil, so they picked Jalapeno Joe (even at the risk of copyright infringement, considering there's a restaurant chain of that name), since the groundhog loved the jalapeno chips so.

Move over, Punxsutawney Phil, make way for the next paparazzi's darling : Jalapeno Joe.

(OK, I know it isn't February 2, but it doesn't matter, we'll just move Groundhog Day to mid-August instead.)
Posted by Sujatha at 7:29 AM

I've had marmots and squirrels do this to me - beg for food at picnic areas to the point of coming and standing almost by my foot :(

And once, in Florida, an ibis did the same thing!

It's a wonder that we don't pass on the obesity epidemic to the wildlife at these places, the way they get accustomed to feed-outs.
Jalapeno Joe needs to go to celebrity rehab to combat his addiction (Cue the cameras, again!)