So we just got back from a fabulous vacation in Las Vegas and Arizona. Of all the gorgeous sights and scenery that we saw, the one that sticks (in my craw, I must add) is that of the Timeshare presentation for a hundreds-of-miles-from-the-nearest-ocean, Polynesian village of high-rises peppered with fake beaches and overcrowded pools, that shall remain nameless. Or maybe I will call it the Tikitiki resort, just for convenience.

It all started with S insisting that we catch the Lance Burton magic show while we were in Las Vegas.So, we dutifully stopped at the hotel/casino where he was performing to inquire about tickets, which we were assured by a gazillion flyers and brochures would be in the range of $60-$80 a pop.
Teresa pounced on us eagerly at the sales pavilion."You want tickets to Lance Burton, Friday 7 pm? I will give you great deal! You just go to the presentation on Tikitiki resort for 2 hours and I give you tickets for Lance Burton show for only $130 for 6 tickets." Her partner Dave pounced on S, wearing his school T-shirt,"You're from Pittsburgh, I'm from there too'- for the hometown boy pitch, adding a yinzer ring of authenticity to the whole performance.
It sounded like a deal to us, and we were also intrigued by the prospect of attending a 'timeshare vacation' sales pitch, just to see what prices might be on offer. Not that we were hugely enthusiastic at the prospect of waking up and hightailing it to the pickup location at 8:00 am in the blazing morning sun (which was extremely hot, hotter than I've ever experienced even in India). But, anything for discounted magic show tickets, after all.

The people had us signing and initialling several documents to verify that we were who we said we were, along with probing questions like 'How important is going on vacation to you on a scale of 1 to 10?', 'Which do you like to do best on vacation: shopping, sightseeing, beaches, eating out etc. etc. on a scale of 1 to 10?' Ulp, could we just get on with seeing the facilities and none of this namby-pamby psychobabble 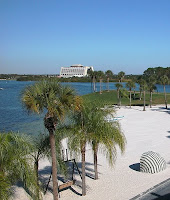 There was more to come, as we waited in the lobby along with about 3 dozen other couples for the 'personal vacation facilitator' we would be paired with. Mysterious mumblings between the suited people at the counter, while we cooled our heels. They kept sending out ushers to different couples as they called out the names, as we waited and waited for ours to be called out. I was getting a little antsy, "Should we go up to the desk and ask?", when along came Maria, huge smile plastered on her face. "Hello, I'm going to be your vacation facilitator today."

The next half hour was more of the psychobabble questioning, only this time done in person, rather than through an impersonal piece of paper, with tantalizing hints about how the timeshare 'with a twist' worked. We sat, dutifully nodded and grinned when appropriate, I munched, not too happily on pre-sliced apples that tasted like sawdust. A migraine was in the works.

Balloons, Wheel of fortune. Hee..ere comes......Vanna...Oops, I mean Debbie. The inspirational speaker who was going to inspire us to throw away our laptops and frantic hunts for travel deals on Priceline negotiator or Travelocity and instead settle down, martinis in hand while we lazily planned vacations in Paris or Maui or Borabora. So we were treated to more mumbo-jumbo while almost each couple was introduced to the room, as in "This is Mike and Grace, they've just renewed their vows after 20 years of marriage", as my headache got progressively worse and I kept edging off my seat, till Maria asked "Are you trying to get up and go, 'cause we aren't done yet."
"Oh, no, I was trying to get a cup of coffee." as I made a beeline for the morning snacks set out.

No, we weren't done, and we next trotted off on a simulated tour of the resort, passing by a overcrowded pool and transplanted palms placed tastefully between 5 storey blocks of apartments. "When is she going to show us the apartments?", we wondered, this after 100 minutes of presentation time.

We finally got a 2 minute tour of the apartment at minute 105, rushed back into the meeting room and seated for a final 'hard sell' round. Maria showed us the pricing. Our jaws dropped- it was double the amount we had thought, based on the intimations of a friendly cabbie. "I heard that some paid X instead of 2X", my husband stated baldly. Maria held up three fingers "I'm calling my manager in to see what he has to say'. He came over immediately and started chalking up the numbers, with modifications to show how we could get from 2X to X, such as splitting up the suites into half, and ended up with a reasonable number just 10 minutes past the allotted time. At which point, my husband stood up and said "You can't force us into a decision in a few minutes- why delay so long to give us this information. We were interested, but wanted all the data you gave us without all the preliminary marketing."

Parting may be sweet sorrow, but not in this case- no tears, just stonyfaced courtesies, as we collected the voucher for free tickets to the magic show which, incidentally, was very good and quite made up for the waste of 3 hours of our morning.
Posted by Sujatha at 9:43 PM

The whole approach sounds very fishy, right? If the economics were to make sense, why would they try to do a hard sell?

I suspect the answer lies in the popping of the real estate bubble. Our friendly cabbie also assured my husband that the partly constructed hotel/casinos on the Strip were at a standstill because of lack of funds, and the TV there had an entire channel devoted to advertising only foreclosed home auctions ('Starting at $51K for a home which might have gone for double the price'). It's anyone's guess as to how much the deed to a small portion of the resort's property on the Strip would drop down if this downturn continues. Maybe that's where the company hedges its bets.

Phew! Glad you got your tickets at the end. This one is a nail-biter! We narrowly escaped the timeshare pitch last time we were in Vegas :)

Free tickets are tempting though. Would you go through it again for free tickets? Just curious.

I suppose if you are not headache prone, it can be as good a morning's entertainment as anything else. I'm sure free tickets would have helped sweeten the deal, even more than the discounted ones. But it might have been possible to bargain with 'Teresa' and 'Dave' for free tickets had we known that we could haggle, which we didn't know at the time.
Being 'timeshare virgins', we were more than curious to see what it was going to be like.
But after talking to another friend who has seen not one but six timeshare presentations, she swears by the bazaar principle. If they offer 13K, counter-offer with 10K, etc. You may even get some genuine deals out of the whole thing.

If there's one thing I've learnt, it's that nearly everything involves haggling. Only they call it "negotiating" here :)