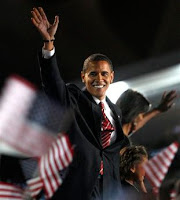 After 20 months of campaigning, millions of dollars in money spent, and the best ground game in the history of US politics, Obama has won the presidency of the United States of America by over 7 million votes and an electoral vote landslide.

He wasn't my first choice as the Democratic nominee, but by the time the race had narrowed to a choice between Hillary and Obama, I opted for the latter, feeling frustrated at Hillary's shrill and negative tone. Despite questions about his lack of experience I had more confidence in his judgement than Hillary's. After he became the Democratic nominee, it was amazing to watch the slow implosion of the McCain campaign in a manner similar to that of Hillary Clinton's primary campaign. Yes, he did it again (not without an assist from the circumstances and failing economy.)As it turned out, the same induced negative campaigning tactics by McCain vs. Obama's disciplined message of Hope and Change may have carried the day in a larger sense.

The pitfalls ahead for a new administration are so numerous that the road will probably collapse before the destination is reached. Obama will have to rebuild the roads before we can get to where he wants to take America, literally as well as figuratively.

Being in Pennsylvania, a 'battleground' state, I had the privilege over these last few weeks to see the Obama ground game in all its glory and nitpicky detail. I went into a campaign office to collect a yard sign, and walked out having signed up to volunteer instead, in whatever capacity I was willing to offer, data entry in this case.

From then, it was a vicarious glimpse into the daily walks and phone schedules of hundreds of volunteers in this office- Doors knocked, phone calls made, registrations made, painstakingly, day after day."Do you support Sen. Obama for President? Are there any questions about the issues I can help answer?" All graciousness when declined, buoyed up hopes when assent. The numbers kept creeping up slowly and encouragingly in this relatively conservative corner of PA.
To keep the volunteers' spirits up, we had special access tickets and rallies galore, Obama, Michelle, Obama, Michelle, Hillary, Bill, Hillary, Bill- all taking to the stage to trumpet the need to work hard to get out the vote and make sure that Change Happened because We the People had had enough of More of the Same.

Hurrah for the next President, and Hurrah for us!
Posted by Sujatha at 8:53 AM

Congratulation, sujatha.
Nice to get details of campaign from ground zero.
how did you celebrate the victory?

Not much by the way of celebration, just a quiet sense of relief that after 8 years of Bush, things should be heading for the right track. I've been invited to a neighborhood party next weekend, still haven't decided whether I can attend or not.
It was pretty strange being in the midst of one of the ground-zero states for the election, and even more surreal that I got the chances that I did. I'm not the adventurous kind, so all this was quite out-of-character for me!

What? You are not the adventurous kind? May be the ranting I do on A.B. rubbed off on you and lit a fire under your feet :-) Can't say it wasn't all fun. And now at last with Obama's victory, also a great relief.

But seriously, as your children grow up and start taking more interest in the goings on of the world, they will keep you on your toes. You will find yourself being dragged to events and happenings that you wouldn't have otherwise cared to participate in. I know. My kids started taking part in political campaigns in junior high. Through them, I got involved in community affairs that I would have otherwise ignored.