Yesterday morning, we woke up to the first substantial snowfall of the season. The ground was covered with about half an inch of snow, blades of dormant grass still scarring the white blanket, leaf imprints left where the random leaf had been blown away from its resting place. M was quite thrilled "Snow, it snowed!" she shrieked joyfully. "Hooray, I get to play in the snow!"
"Not so fast, you've got to get ready for school now."
Having put the damper on her plans, I watched as she trudged off despondently to the bathroom to get ready for school. At the bus stop while we waited for the bus, she engaged in secret confabulations with A, her friend from across the street, ducking behind the large oak trunk as I approached.
There was a little more snowfall during the day, adding another half inch or so to the already thinning accumulation. So, when M got back from school, she dumped her school bag at the door and insisted "I want to go out and play in the snow with A!". I kept an eye out for them, as they were playing in the front yard that opens onto a busy street. A little while later, I could hear M shouting as she rolled a small ball. A had a larger snow ball, screaming as she tried to prevent it from rolling down the slope.
The light was waning and M shivering with cold as she finally stepped inside after the hour. "I'm cold!" she wailed, ripping off her shoes, socks and gloves covered with ice crystals. "Maybe you should try sitting by the warm spot in the family room." I suggested (That would be the first vent for our furnace's duct system, the warmest spot in the house.) "No, I want some hot cocoa."
By the time she was done with the hot cocoa, it had darkened quite a bit, and all I could see of their hard work outside was a faint impression of a snowman. Never mind, it would last all night, assuming some neighboring teen didn't get it in his head to decapitate it.
So, this morning, I went out to take a few pictures of the first snowman of 2008-2009. He looked very cute, with a pine sprig nose and twig mouth and eyes. M told me that they had named him Frostkins, so here are the results (unretouched) from his glamor shoot.(Click on the photos for a slightly larger version.) 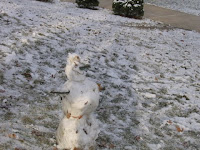 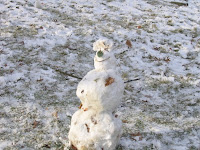 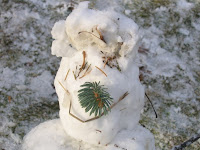 I rather like him! Maybe it's his curls, or his goofy smile..or the way he thrusts out his chest like an old general :)

Wow, snow already. We've had frost but no snow yet. Can't wait to make some snow angels!!

@Lekhni:
He does look quite endearing, doesn't he? The curly hair was M's idea, she came in saying something about adding some hair to his head, but I didn't realize what she had done till the morning.

@Amit:
What, no snow yet for you? Global warming hai kya? Never mind, you'll get your share, probably sooner than later once a pesky nor'easter shows up, I guess. Then you can make all the snow angels you want, if you have energy left for them after shovelling all the snow off your car.