If it is Monday before the elections in Pennsylvania, it's raining politicians. Today, it was Hillary's turn, and what's more, in a speech on local TV, she promised another dose of Obama in the evening.

I had just finished a parent-teacher conference at M's school, and decided to check in on the campaign office for any data entry needed, though much of that work has been completed. I parked in the usual lot behind the building, noting with apprehension that the car next to mine had been ticketed. I put in two quarters, rather than a single, figuring that gave me half an hour at least and walked up the sidewalk. A black suited gentleman with earphones waved his arms at a police official just ahead. What was going on?

At the entrance, a big crowd of people stood to one side, with a lady I knew in the office smiling at the entrance. I mouthed my question to her 'What's going on?' A young fellow came up to me and explained 'Hillary will be here soon, they want all people to stay on that side.'

I duly complied and rather than taking up a prime spot I burrowed into the far end of the crowd. I stood next to a Chinese-American lady with her two daughters, the younger in a stroller and smiled as the little one tried to grab her older sister's sticker. I had been passed one earlier so I pulled mine off to give it to the little one, and rummaged in my purse for a button that I had handy, but never worn.

We fell into a friendly conversation about our kids as we waited. Half an hour passed, no sign of any 'black SUVs'. The police cordoned off the lane closest to the sidewalk where we stood. The TV camera crews had arrived and were positioned in the prime location near the entrance. 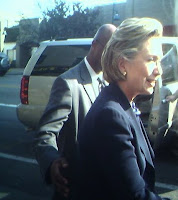 g nervous about my parking spot. I slipped away to the other side of the building in an effort to put in a couple more quarters, but couldn't reach the parking lot: Fence and level difference in the way, I could only peer down at my car's windshield. No yellow ticket on it just yet.
I went back to my original post, and not a moment too soon.
In short order, a pilot cop car with lights flashing, followed by a champagne colored SUV . Hillary had arrived! She alighted not 5 feet from where I stood. The crowd clapped and shouted in appreciation. We proffered our hands and she shook them all. I managed to tell her "Thanks for all you've done," and heard her 'Thank you" in response as she continued shaking hands on her walk to the entrance.
(Sorry for the poor quality of the photos, but this was my cellphone camera, but it will have to do for the impromptu photo-op.) 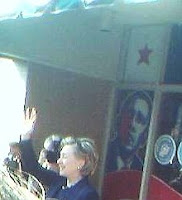 She was inside the office for the next half hour, talking to field organizers, and other 'higher-ups' in the campaign hierarchy, addressing a bevy of cameras with a short speech before leaving. I did manage to get a second photo as she left, which you see on the side.

As soon as the caravan of vehicles had made their turns back onto the main road, I snuck under the rope and hightailed it to my car in the back parking lot. Mercifully, no tickets. Yay, I got to shake hands with Hillary Clinton and escaped a parking ticket narrowly on the same day. It all comes from being in the right spot at the right time!
Posted by Sujatha at 11:45 AM

That's nice! I like the fact that she campaigned at full blast for Obama, it's hard for anyone in her position to do that..

She was a thorough professional in that respect, despite the ugly primaries. She sounded hoarse in a TV video of a speech earlier that morning, and mentioned that she had done over 70 campaign events for Obama! The mind boggles.