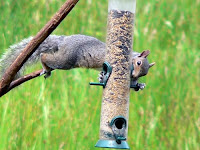 The other day, a largish squirrel with a black nose stopped by my brand new bird feeder. The old one had a hole that you could drive a truck through, courtesy of said squirrel, who had managed to pry off one of the perching-post assemblies.

This one didn't last 2 hours. Blacknose stopped by, took in a few whiffs, put out her front paws and leaned all her weight on the nearest perch-post.

I opened the sliding door to the deck and charged at her, waving my arms about madly "Scoot! Shoo!". Blacknose scurried away, peering cautiously from behind the oak trunk.

I moved the shepherd's hanging post a little further out, to make it harder for the squirrel to bridge the gap between the deck railing and the feeder.

She waited till I had gone back inside to attack the feeder again. This time, she couldn't reach the feeder easily. Still she determinedly shimmied up the post and attacked from the top, dangling precariously. I decided to come out at that point. She made a mad scramble for a thin branch of the nearest bush and raced away to safety.

I went back inside and about my work. When I next looked at the feeder, it was empty. Blacknose had managed to rip off the perch-post again. It wouldn't do to try and refill it, as all the seed was going to pour out if she so much as tilted it slightly.

My options now are
(1) Try a 'squirrel-proof feeder', for which there is no guarantee that Blacknose won't figure out a way to raid it. Not to mention, the shepherd's hook, while sturdy, cannot hold the weight of the armor that such a contraption would need.
(2) Mix cayennne/chili powder with the seed. This shouldn't harm the birds, I gather, but is unpleasant for the squirrels. In addition, it could be unpleasant for the mixer, according to some bloggers, but there are cultural advantages to my growing up in a home where mixing chili powder for pickles is a routine affair.
(3) If (2) fails, "Try providing squirrels with their own feeding station if all else fails, and give them whole dried corn and seeds that they like."

(Squirrel photo from www.freedigitalphotos.net)
Posted by Sujatha at 7:12 AM

You lead such an adventurous life, Sujatha. :)

What can I say, between the kids and the squirrels, I have my hands full, adventuring in my own backyard all summer ;)