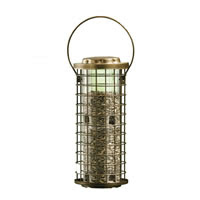 Considering that the previous bird feeder was ripped to shreds by the friendly neighborhood squirrel, I marched off to the store, determined to find something that would withstand the depredations.
The shelf was lined with several contraptions, but the one that caught my eye as a good candidate in terms of price vs. sturdiness was this one.
'Squirrel stumper', as it was called, I thought that it might do the job of deterring the attacks effectively.
So I filled the bird feeder and waited, and waited and waited...
No sign of birds, much less squirrels.
I refilled the bird bath (not the rusted 'copper' birdbath, but the nice terracotta saucer placed on top of it.)
Soon enough, Squirrel #1 showed up. Let's call him Larry.
He took a few dainty sips at the bird bath and scampered on to the bird feeder and sat there woefully for about a minute, or so I thought.
Next he casually put out his paws and attempted a half leap to grab it.Ha...he would have his comeuppance!
No such luck. Larry dextrously put out his paws and scooped out a single sunflower seed which he proceeded to munch through with great satisfaction as he posed on the deck railing. Then he repeated the same maneuver, continuing thusly for the next half hour, till I got tired of watching and went off.
An hour later, I stopped by and Larry was gone, his place taken by Curly, who being more acrobatic, had wrapped himself around the feeder, dangling upside down and filching seed from the feeder every now and then. A lone red cardinal watched cautiously from a nearby branch, venturing every now and then to grab a few millet seeds spilled below the feeder, flying off to feed its baby. 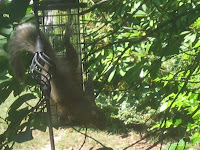 Curly finished off with a draught of cool water and ran off, as Moe chased him away and came to get his share of the spoils. He couldn't quite figure out how to get to the seeds, the lack of perch making it hard for him to grab hold of the feeder, but tried shimmying up the shepherd's hook that the feeder hangs from instead. Then he sat back on the railing and thought a little 'think', much like Winnie the Pooh.
And it came to him, he adopted Larry's tactics and was able to get out individual sunflower seeds with no major antics.
So, we've gone from Bird Feeders to becoming the Squirrel Spa, as Larry/Curly/Moe nap on the railing in between sunflower seeds. The squirrel stumper has turned out to be more of a bird stumper, since it lacks perches that make it easy for the birds to rest and feed.
I think I will go back to the old plastic feeders for the birds and set up the 'squirrel stumper' as the squirrel feeding post, filled with sunflower seeds and corn.
Posted by Sujatha at 2:55 PM