Racing through the Louvre

From the New York Times a few weeks ago:

"Spending an idle morning watching people look at art is hardly a scientific experiment, but it rekindles a perennial question: What exactly are we looking for when we roam as tourists around museums? As with so many things right in front of us, the answer may be no less useful for being familiar."

Why indeed do we wander around museums? Is it the age-old quest for finding ourselves in our past, the thirst for knowledge? Or the window-shopper and street-gawker's instinct? Is it less about stopping and staring and more about bragging rights as in "I visited the Louvre, when we were last in Paris." Or maybe a combination of 'All of the Above"?
As a kid in Paris, I had been taken to various sections of the Louvre for school field trips, spending a few hours once in the Egyptian section, and another visit in the Greek section, but remember very little of what are considered to be its main attractions. This recent visit was an all new-experience for me, only reminding me that it was perhaps at the Louvre that I acquired my taste for museum-hopping no matter where we went.

Ah, the Louvre! The perfect place to loiter leisurely, gazing at John the Baptist's all-knowing smile, or perchance the mysterious magnificence of the Mona Lisa.That is, until the hordes of tourists and tour guides waving flags, assorted brochures and even umbrellas to keep their groups together, all trample over you in their eagerness to see the next item on the 'Da Vinci Code' tour.
The Monna Lisa was unreachable. A special line of the devoted faithful had to be stood in and endured, before you were able to partake of her timeless gaze at closer quarter

s. We settled for the 'distant darshan'. Even hoisting M onto her dad's shoulders and placing a camera in her tiny fingers elicited an indignant "Not allowed" from a museum security official doing due diligence.
Never mind, the huge painting of the Wedding Feast at Cana (Veronese) on the opposite side was quite a show-stopper, though p

recious few of the crowds milling around the Gioconda paid any attention to it.
With over 35,000 paintings and antiquities, we could have spent an entire month in the museum, but having only a day, we could only spent a paltry few minutes in each section, catching the 'highlighted items' suggested in the museum's brochure.

Then, we decided to linger in certain places, not quite the stuff of tourist lore, but quite fantastic nevertheless. The Persian section was eye-popping, with its huge capitals that took up so much room that one could barely imagine the size of the pillar that supported it.
A small crowd was milling around a rock edict which bore the Code of Hammurabi, with a prominently displayed French translation nearby- 'for X, off with the hand... for Y, off with the leg... for Z, off with the head..."- I mentioned it to S: "It's the Off-with-his-head school of justice", as an eavesdropping tourist nearby snickered in agreement. 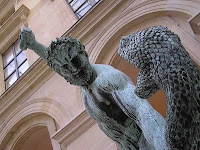 The sculpture courtyard adjoining the Persian section was a relatively quiet place to recuperate from the milling crowds jostling to pose with the Winged Victory. I sat behind a statue of Hercules battling a gigantic snake , though not at a good vantage point (read, treated to a prominent view of the Derriere). I was reduced to sneaking peeks at the red charcoal drawing of the statue, which an art student was working on, right next to me. She had time to spare, tracing every contour with careful concentration, but tiring presently of her drawing, whipped out a cellphone and started a quiet conversation with a friend. So much for the slow version of museum enjoyment in the era of the cellphone.
M wanted a drink of water, and the quest for a water fountain began in earnest. But the Louvre, being a palace more than a few centuries old, didn't have the requisite plumbing to handle the thirst of the trampling hordes, unlike the new-fangled shiny restroomed and water-fountained American museums. We waited in line desperately at the entrance to a crowded café, and 15 minutes after we made it in, the bored-looking waiter finally brought a tiny cup of cappucino (10 Euros! Eeek!) and a bottle of Evian (3 Euros! Eeek-squared!). Next time we visited a Musée, we resolved to carry our own water, even if it was in a distinctly unfashionable recycled Fanta bottle.
The famed glass Pyramid was but a snatched glimpse through the windows of various wings, as we gaped our way through the luxurious apartments of Napoleon III. Then we redoubled our walk through the section of European painters, catching a few famous Rembrandt self-portraits in the process.
How did we manage to spend the better part of a day in a museum with M and S, notoriously allergic to museums? S didn't complain much, having succumbed quite happily to the touristy notion of 'catching all the highlights' in the brochures. M was anointed the official photographer and religiously clicking away at everything in sight. Unfortunately, we only have a handful of usable pictures from her collection, but the camera was worth its price in gold, for the peace of mind and busyness of M that it brought.
Posted by Sujatha at 2:22 PM

'M was anointed the official photographer ' - master stroke!
y do we visit museums? makes u feel as if u r part of past - gives u a sense of continuity in time. u may not believe this , every time i pass thru udayamperur (where Synod at diamper happened), i feel stirrings of history in my blood - -
luck u-visiting louvre

Maybe you'll get around to a Paris trip yet, someday!