Make Way for the Philinator

If the PETA had its way, and Punxsutawney Phil were replaced by an electronic groundhog, that is.

In a letter pleading the case, they write:
"I am writing on behalf of People for the Ethical Treatment of Animals (PETA) and our more
than 2 million members and supporters worldwide. We would like to present you with an
exciting, innovative proposal—one that would benefit both Punxsutawney and Punxsutawney
Phil. Please review the following information and then make the compassionate decision to use an animatronic Phil and retire the live groundhogs who are used for Groundhog Day activities to a sanctuary."

I have a better idea. Why not retire Phil and replace him with Jalapeno Joe, who would be glad to understudy him for a couple of bags of jalapeno chips. Here's an audition photo of the prospective candidate: As you can see, he's a fine specimen 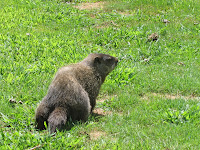 , not unworthy of the mantle.

My guess is that the PETA has the Zhu-zhu Hamster pets in mind. The reasoning goes thusly- if we can have robotic hamsters, why not replace the February 2nd show of Punxsutawney Phil with the Philimpersonator.

Although, given the current technologies, something like this CMU version might scare away the hordes of cheering tourists, unless they manage to fit it with a souped up Zhu-zhu pet skin of sorts.

Sorry, I've been remiss with the posting. I'm exhausted from just contemplating getting on Facebook, which I joined a little over a week ago. Following multiple threads of conversations between friends and friends of friends without frying a few brain cells is impossible.
Till I was brought to my senses by this post by Kathy at Junkdrawer:
For all the comments, snarky or otherwise, which I managed to come up with as response to friends' comments or updates, I could have written a few blog posts, opining about those all to myself.
I struggle to keep the conversation going, or just zone off, and hit the logout button within barely a minute of logging on. I've religiously set my privacy settings to Only Friends, determined that no innocent or not-so-innocent comment of mine doesn't reach the prying eyes of those-who-shall-not-be-named. I've set up albums of pretty flowers and seashells and landscapes, just to test the feature. The only personal photos that I put up are a couple of sober webcam shots that show me looking seriously grim at the whole affair.
The Facebook Friending phenomenon is another quandary. To friend or not to friend, that is the question.
How bad is it to be on the receiving end of an ignored friend request? I had a taste of that when I attempted to reconnect with a long-lost cousin. It felt like a slap on the wrist when she brushed me off, even though I half expected it. Presumably it feels the same to someone whose friend request you ignore, unless of course they are spammers from Outer Mongolia or such.
For the time being, the experiment is still on. I'm already tiring of even the daily check lasting 2 minutes. I may go to a weekly check instead, and let it fade even further, should that feel too exhausting.
Posted by Sujatha at 4:34 PM 5 comments:

In a big reversal on definitely saying that the plastic Bisphenol A (BPA) is not a safety concern, the US FDA is now recommending that consumers take steps to minimize exposure to it while further studies are initiated to check for subtler effects of the chemical on the human body.

"The agency said Friday that it had “some concern about the potential effects of BPA on the brain, behavior and prostate gland of fetuses, infants and children,” and would join other federal health agencies in studying the chemical in both animals and humans."

Today, a new ecstatic 'could be' wonder plastic product and use for it is being touted in an article:
'A Clear Coating, with Green Applications'. Just coat everything in sight with this 'new improved formula' and you won't have to do the dishes ever. Everything would just slide off with a water wash. Now, as a matter of principle, anything that makes for less housework is a winner in my book. Especially dishes. That, and getting off my kids' backs in reminding them to brush their teeth before they all rot and fall out.
In fact, the article's author makes so bold as to suggest in the final lines that:

"Here’s one suggestion for him: Come up with a permanent self-cleaning shield for our teeth. Then, in addition to dishwashing, we could eliminate another chore: daily brushing."

Now, wait a minute, before we mob the stores to buy this 'Wonder Wash' ($9.99 + Shipping and Handling, but wait, there's more if you order now from 1-800-WASH...). I suppose it's time to take a deep breath and not rush to conclusions before the FDA investigates the chemicals used in this wonder product .
How deflating!
Posted by Sujatha at 7:21 AM 4 comments:

Remember the outrage that ensued when some company attempted to patent turmeric as a cure for wound healin? That patent was challenged a few years later by the Council for Scientific and Industrial Research in India, ultimately leading to its overturning. It was a patently ridiculous claim to have discovered something known for thousands of years. Such cases of biopiracy still pop up every now and then.
For instance, this attempt to patent the healing properties of watermelon juice.
But now, there is a new remedy to these attempts. The Traditional Knowledge Digital Library is an attempt to codify all the knowledge of the centuries, providing a reference point against which to decide the novelty of such patents.
Next time you want to know what herb can be used to treat your tummy-ache, you have a traditional knowledge database from which to take your pick of nostrums.
Posted by Sujatha at 6:31 PM No comments: