A few weeks ago, my cell phone rang with the special tone reserved for text messages. I scrambled for the phone and looked at the message. It said plainly : "Hi".  I couldn't identify who it came from, except that it appeared to be a local cell phone number.
Next, when it rang again shortly, it was a message from my mother, signed by her. I looked at the number and it appeared to be the same as the earlier one, so marked that up in my cell phone directory as 'Amma'.
Some days later, I received a couple of puzzling text messages from 'Amma', something about "Whassup bro", with some added commentary that seems too prurient for a family blog. I deleted the messages, wondering whether I had wrongly tagged some strange phone number with 'Amma'. I  just hoped this troll would vanish, without giving further trouble.
But there was more to come. I lent the phone to S for use while he went to the local Science Center. He returned it to me after the trip, asking "Amma, did you send me a text message while I was there? I didn't read it. though. Or maybe, was it from Aachi (grandma)?"
I examined the phone. It was a 'rooster and cat' joke. (I will not print it here, but the curious can google it, if they choose.) Did S read it? Why was he insistent he didn't read it? Or maybe he read it but chose to keep silent about the contents. It hardly matters.
I was getting nervous. Who is this mysterious personage tagged 'Amma' who sends adult jokes and random incomprehensible ramblings to my cell phone?
Yesterday, the phone went off again, with sure enough, another text from 'Amma'. Only, this time it was "Yo bro have a good time at the prom, From: Amma".
Ah, mystery solved at last. Some gentleman who had entered the wrong phone number to a friend and was texting me thinking I was him. Not a phone-stalker as I had feared.
I promptly sent a text message back this time. "Sorry wrong number"
He sent back a puzzled "Huh?"
I sent "I keep getting messages but am not the right person. Check your telephone number before sending."
A few minutes later, " Oh my bad bro"
Hopefully, that's the last message I receive from 'My Bad Bro' who masquerades (or was forced to masquerade as) 'Amma'.

Update:
On comparing notes with my husband, he has the exact same number listing the same messages. This is one heck of a spammer. Unfortunately, our cell phone carriers don't provide any way to block particular numbers, so we're stuck with this 'Bad Bro', unless we turn off all text message service, I guess.


In the meantime, as I wouldn't wish to leave you without a little entertainment after ploughing through all this mess, here's a real rooster and cat video for your edification. 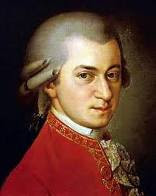 Believe it (or in it) or not. That's the name of a scientific paper published in a journal on the validity of the famed 'Mozart Effect'. I love the name, more so that a scientist dared to use it in the actual title of his paper.


"The transient enhancement of performance on spatial tasks in standardized tests after exposure to the first movement “allegro con spirito” of the Mozart sonata for two pianos in D major (KV 448) is referred to as the Mozart effect since its first observation by Rauscher, Shaw, and Ky (1993). These findings turned out to be amazingly hard to replicate, thus leading to an abundance of conflicting results. Sixteen years after initial publication we conduct the so far largest, most comprehensive, and up-to-date meta-analysis (nearly 40 studies, over 3000 subjects), including a diversity of unpublished research papers to finally clarify the scientific record about whether or not a specific Mozart effect exists...."


" On the whole, there is little evidence left for a specific, performance-enhancing Mozart effect."

So much for the tinkling sounds of Mozart's lullaby that played whenever I turned the key of  S's musical mobile, and then when the keys of M's play gym were pressed, playing the opening strains of Eine Kleine Nachtmusik. Or the ubiquitous Baby Einstein videos playing variants of Mozart in millions of homes where anxious parents rushed to enhance their babies' spatial skill abilities.
Regarding the role of music in general to enhance learning, this recent study indicates it makes very little difference:

This might account for the effects of my listening to old Bollywood tunes on the late night radio show. For a while, it contributed to lack of attention to my studies and more to the music, as I tried to figure out the lyrics. I took to noting them down in a blue diary. Once I was done, it was relegated to the background the next time I heard it. I don't know if it helped me in my exam preparations, but I was one of the "Most Wanted" members of the class Antakshari team.
Posted by Sujatha at 4:53 PM No comments:

"Happy Mother's Day", announces the email inbox. "Mother's day sale at B&N (or Amazon or wherever)" shouts another exuberant email header.
Thankfully, no more after today. At least, not for another year. Next week will start the onslaught of "Have you planned for Father's day and the wonderful gift/card you are going to buy?"

Yay for all the hand-drawn cards and heartfelt scribbles, the bouquets, the restaurant dinners and over-the-top gifts! We children do it dutifully, because to not do so, would be to not conform to social expectations of using this day to appreciate our moms. We think that it maybe absolves us from all the times we just brushed off Mom's tired nagging with "There she goes again."
But what goes around comes around.It just takes the passage of time to realize that  for all the 'attitudes' you came up with in your time with your mom, you are now repeating the pattern with your own kids.
What does Mom truly want? And not just only on Mother's Day.
Happy Kids. Healthy Kids. Successful Kids.Happy Me.
In that order.
If we can't have it all, as happens so often, we'll take 'Happy Kids' over everything else.
Thank you very much.
Posted by Sujatha at 9:25 AM No comments:

Tulip Time is almost over

So here are some of the tulips from my front yard. My sister had these shipped over direct from Netherlands last autumn, as a birthday gift. I wasn't sure that they would survive the rapacious squirrels and voracious deer, but survive, and thrive, they have. 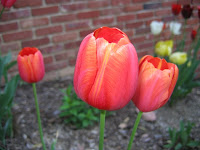 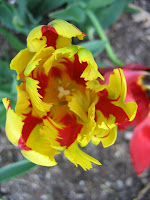 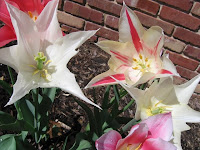 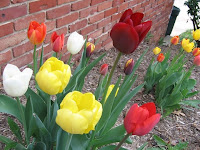 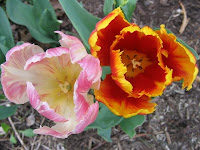 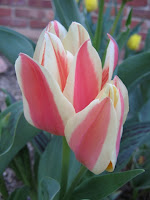