Another school year's end, another 'debut' dance recital, another rite of passage.
The dancer danced wonderfully, the costumes were gorgeous, the stage settings were fabulous, the footwork was fantastic, the choreography was superlative, the arrangements and food were excellent...
But...the music was blah and a tad too loud, the air-conditioning inefficient, the speeches tedious, the makeup/abhinaya inadequate, the gentleman in front blocked the view...
Why do we in the Indian diaspora subject ourselves to the rigors of  organizing and viewing Arangetrams (of dance, and more recently, of music, as well)? Is it our answer to the  bat mitzvahs and quincenearas and graduation parties? Raama Bharadvaj has a fairly comprehensive article on the phenomenon.
There's a tremendous amount of hard work,effort and planning that goes into these events, which are now conducted on par with weddings, in many ways. Maybe some treat it as a sort of dry run to the wedding that they will have to conduct years in future. But for some, it may be an acknowledgement of the fact that in living outside India, there is only a miniscule chance that a purely traditional wedding  with their daughter as the premier element will be possible in future.
Cost is a prime factor, as is the parents' ability to pay. The numbers I cited in an earlier post on "The Bharatanatyam Blues" have now ballooned from a few thousand to at least few 10s of thousand dollars, on average. Inflation strikes, as it always does. It has gotten so expensive that parents now weigh the prospect of spending the equivalent of a year's college tuition on a single event to highlight their daughter's achievement.
But is it the start of a true dance career? Maybe in the case of 2 out of 10 arangetrams performed. The remaining treat it as a culmination of their dancing career and promptly march off to college to major in biology, physics, math, etc. and move in on their eventual career goals of becoming doctors, lawyers,investment bankers, scientists, engineers...
Life goes on, another check mark is in the book of achievements, another paragraph in the resume.
For the few, dance is truly a way of life, an end in itself.

Links:
Arangetram planning and resources
A History of the cultural and social implications of Arangetrams.
Posted by Sujatha at 8:04 AM 2 comments:

A Beary Cautionary Tale (by M)

Once there was a bear who was very rich and lived in a mansion in a beautiful forest. 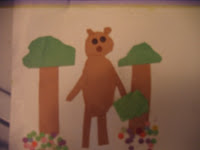 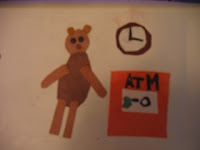 He spent all his money on going to a tanning salon and went to an A.T.M.
When he got to his account he noticed something shocking. He was bankrupt. 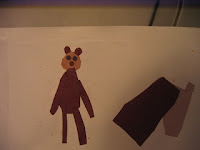 Since he was poor he could not pay house taxes. He ended up having to live and sleep in a garbage can for the rest of his life.

(Pretty hilarious how she managed to weave in lots of current event references!)
Posted by Sujatha at 4:50 PM No comments: