The Storm after the Calm 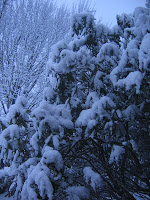 It never fails. After a winter with several hyperventilating newscasters gushing over the Mother of All Snowstorms, which ends up just being just extra heavy rainfall, and  legions of anxious Pittsburghers look like nitwits for having believed all the hype and ransacked the nearest grocery stores for bread, milk and toilet paper.
A big one strikes without warning or fanfare. Monday's snowfall snuck into town like a thief on padded socks, and left in a huge churning morass of slushy mess, with abandoned cars and trucks by the dozen on unsalted roadways and parkways.
It's just a little rain, I thought, as I drove out to collect M from a sleepover. It was just going to be a wet day and evening. Until I looked outside amazed at the brown deck now covered with a layer of white pellets. The white stuff was coming down in bigger clumps. A couple of hours later, and it was still coming down, now about 2 inches.
I reached for the phone to alert my husband- he's sometimes so busy on the phone that he will not turn and look out of his huge glass windows. "Don't delay leaving work for too long- the roads are likely to be nasty. It's been 2 hours with no sign of salting trucks, out here. Everything's turning white including the roads."
Three hours later, the desultory skeleton crew had been by twice on our roads, but with barely any effect, as the snow continued to fall. The radar picture showed a storm system determinedly centred over our area. This was going to stay in place for the next several hours, one could tell.
The garage door opened, and closed. My husband clambered up the steps, a huge grin plastered on his face at having made it home in one piece. "I nearly steered into another car near Carnegie. The roads were so bad that I took the long way home, just to avoid the side roads." Well, at least he was safe home now.
The next morning showed a grand total of 7 inches, though I'm sure that our driveway had at least 9. The lay of the land guarantees that snow drifts pile up against the garage doors, sometimes as high as 10 inches. Time to break out the snowblower for the first time this winter.
And silly me, here I thought that Punxsutawney Phil's prediction this year of an early spring meant no more late winter snowstorms! Well, there's always tomorrow, where there is already a flood watch out for melting snow from the storm, followed by temperatures blazing up into the 40s, so that all the snow on the ground melts in double-quick time.
Posted by Sujatha at 5:18 PM 2 comments:

M had her ' laundry assignment' from school a couple of weeks ago. Their Home Economics (or whatever is the current PC term) teacher sent them home with printed notes on how to sort their clothes by color, put them in appropriate load sizes in the washer, selecting water temperatures and wash cycles, detergents, etc. I promptly ignored the whole thing and taught her my method.
I recall a few years ago that at one of the PTA meetings, a parent suggested replacing these 'useless' Home Economics classes on laundry,sewing and cooking with computer and robotics classes, to keep the kids up with the latest in educational gizmos and technology.
I'm so glad that it didn't catch on. At the very least, these kids will learn some essential skills that will come in handy when they go off to college.
I was already well-trained in handling washing the family laundry from the days when we underwent a temporary maid shortage, so having to do all the chores on my own on moving to the US didn't faze me at all, unlike many newcomers who have been used to dhobis and maidservants doing this.
But times are changing, even in India, as washing machines (though not dryers) make inroads into the urban milieu and as some city-dwellers have jumped joyously on the concept of frequenting laundromats, a relatively new offering in metropolitan cities there.


"Mr. Chaudhary, 22, works in back-office services for a big American bank. He works long, long hours and lives alone in a small bachelor flat. “My washing maid did not come the last two weeks so it was really a bad situation,” he said, with the pained expression of a man over-acquainted with his socks.
Tired of hassling with the renegade maid, on Saturday he resolved to do his own wash, and tracked down the gleaming glass storefront of QuickClean in a narrow alley of a working-class neighbourhood popular with students.
An hour later, he had paid about $3.25, been talked through the workings of a small bank of stainless-steel machines, and was leaving with a bag of fluffy if lumpily folded clothes."

Lumpily folded clothes-that reminds me that I have a pile of laundry waiting for my attention, and I need to get M to do another load of her laundry.Off I go.
Posted by Sujatha at 3:56 PM 6 comments:

With the kids sitting right beside you, of course. It's an experience not to be missed. We are huge costume drama fans here (i.e. M, S and me. My husband isn't so enthusiastic.), and we never miss the Masterpiece Classics on PBS, having run the gamut from Jane Austen to Charles Dickens to  the current craze : the brand-new Downton Abbey. Set in the years preceding World War I, it showcases the Edwardian era and follows the vagaries of the Earl of Grantham and his family.
Episode I had a shocker, which I mercifully wasn't called upon to explain to either of the kids. They simply seemed to have taken it for granted that one of the characters, a gay footman, gave another male character a lingering kiss.
Neither did I have to explain a lovemaking scene in the the second episode. The kids were running around in circles playing laser tag with a friend, and didn't even see the scenes in question. I merely had to wave it off with an airy "Mary was in love with that guy, but he died suddenly." when M stopped by for an explanation later.
At the conclusion of Episode 4, the last in the series, all I had to explain away was an induced miscarriage by a villainous maid, and voila, difficult explanations ended. At least, till the next season appears, probably a year from now, given that it is still in production and scheduled to be filmed only this March.
"What did you think of it?", I asked M, with some trepidation.
"I liked it very much."
"Would you want to see it continued?"
"Yes."
"Then you'll have to wait till next year."
"So long!"
"Well, it does have much better production values than your average Mega-serial. It takes time to set those up, unlike the easy setups in Arasi" (Another favorite that they acquired a taste for when they last visited India.)
Come to think of it, it does have the typical mother-in-law vs. daughter-in-law antipathy, scheming villains (in the form of plotting servants), good-as-gold characters, not-so-good heros and heroines, surprise twists and hooks that characterize any soap opera world-wide. Just because it is filmed on location in an actual castle and features period costumed characters doesn't make it any different from the overall mind-tugging storylines that regularly enthrall TV viewers all over the world, whether it be Mexican telenovelas or Kollywood Mega-serials or Saas-Bahu dramas with bejewelled be-saried overly made-up matrons and their daughters-in-law.
Posted by Sujatha at 6:07 PM 3 comments: