The trucks and trailers rolled up our road in the early hours of the morning. A prominent 'Road Closed' sign went up at the fork, with a markered 'AHEAD' . Driving back from work one day, I drove down past the Road Closed AHEAD, nevertheless. A block down, a uniformed security guard stood right next to another Road Closed sign. I had to turn around on one of the side roads. Determined, I turned right back to the fork and drove up the other way on the circular road. Another Road Closed and guard greeted me after 4 blocks. But this one asked "Do you live a few houses up that way?"
"Err.... yes", though I lived many houses up that way, so to speak.
"Drive on," he waved me through. I crawled past all the trucks and trailers, now humming with activity in front of a house with a black box frame and curtain in front of its entrance, cranes with lights and whatnot, all the paraphernalia that a film crew have to transport wherever they go on location.

We may have visited Hollywood last year, but this year Hollywood came to our quiet suburban oasis. More to the point, Emma Watson (of Harry Potter movies fame) came to our neighborhood, filming for 'The Perks of Being A Wallflower', written by a former native of our township, now being made into a movie. He could have filmed anywhere he wished, but decided to pick his hometown as the location for the filming.
Rumors flew fast and thick. They were going to film in the high school. No, they were not going to use this high school because it looked too modern. They were filming in Baker park. No, they were filming on Hays Road. The crowning moment was M rushing home from the bus stop and proclaiming "They are going to be filming in front of C's house, right here on our street!". That was one rumor that turned out to be true, confirmed by the flurry of excited emails from the neighborhood email newsgroup.
M and S and their father spent one whole evening watching the film crew create a fake snow-on-the-ground scene at the location, along with a few dozen other star-struck onlookers, or just neighbors choosing to walk their dogs at the choice moment. Alas, no sign of Miss Watson that evening, though Logan Lerman (of Percy Jackson and the Olympians fame) and Katy Walsh (of Private Practice fame)were being filmed. ( Full Disclosure : I've seen neither of them on the big or little screen, never really heard of them till this movie.)
The week over, the film crew trundled out of our neighborhood, moving shop to other locations. That was it, I thought, for the Emma Watson sighting hopes.  Until the buzz started again. They're filming at the King's restaurant, right across from the Sunoco gas station. The King's restaurant has nice desserts, though its menu and decor look like they still belong in the 1980's. An absolutely perfect setting for a story frozen in that time period, I'm sure. And, of course, I need to fill the gas tank, it's almost running on empty. So M and S peered through the windows while I filled up the tank. Nothing much to be seen, beyond a line of onlookers, assorted equipment and lighting fixtures. 'No, Miss Watson won't sign autographs. She's too shy to do that.' one of the security guards averred to the onlookers. Miss Watson showed up much later that evening and waved to her fans from a safe distance. (Heard via the local internet grapevine.)
Last Monday, I decided to brave my way uphill with M, they were filming again that day, and this time, Emma Watson was most certainly expected. We walked up, chatting with neighbors on our way and walked back, promising to get back there around 6 pm. A van drove up, just as we headed home, and I thought I caught sight of short chestnut hair and Ray-bans in the front passenger's seat. Could that have been Miss Watson?
We walked back after dinner and M was met by a group of acquaintances, all girls her age, squealing with delight as they waved Post-its with suspicious looking squiggles. 'Emma Watson stopped to say hi and signed these autographs for us!' M's face fell: "We should have gotten here earlier."
"Never mind, maybe you'll get to see her filming a scene."
The location was drenched with dazzling sunlight and the sun's angle was just so, blinding M. After an uncomfortable half hour, she gave up and we walked back as she was near tears over having missed Miss W.
We went back at 8:00pm. The waning light was perfect for them as they dolled up a house for a Halloween trick or treat scene, shot in about 5 takes with little kid actors costumed and running back and forth.  We did have a nice vantage point of the proceedings, sitting on the cool grass in front of C's house, and long pants, which ensured that we didn't spend as much time swatting away mosquitoes as did some of the be-shorted teens and tweens who had come to watch. A tiny white dog provided ample entertainment for those not inclined to keep their eyes glued to the set.
No Miss Watson, again.
M had cheered up considerably at having watched for a while, even if we didn't get a glimpse of the star.And to top it all, she came home the next day beaming, waving a sheet with the Emma squiggles...or rather, curlicues. She had managed to get an extra copy that C was gracious enough to give her. So now M has her  Emma Watson memento, even if we missed seeing her on location.
Posted by Sujatha at 7:14 PM 2 comments:

"When does a city turn into a Metropolis? When nobody asks you where you came from, nor where you are going."

There are many kinds of anonymity, but the kind that comes from living in a Big, Very Large, Humongous City is a unique variety. It allows you to blend into the crowd, while still remaining your own person. with your own little idiosyncrasies and crazinesses. It offers you myriad chances to watch those of others.
Earlier, I lived in a town aspiring to cityhood, then  briefly in a City so ancient that she was beset constantly by her past, then in a city that is undecided as to whether she aspires to be a Metropolis. You are still asked where you come from, here, and are defined by your answer, whether you state India or Indiana.
We had paid a weekend visit to New York, staying in one of the hotels within a stone's throw of Newark airport. The sense of transience never strikes one so hard as the endless parade of people who flow through those lobbies. Baseball teams in full uniform, the dust of the field still on their trousers, weary polyester-suited flight crew with cabin luggage in tow, passengers yelling ostentatiously into their cell-phones as they conduct loud conversations with their relatives informing them that yes they have arrived safely, yes they were put on a later flight after missing their connection...
The goal wasn't to visit Newark, which is just a place that one stays in to avoid the hassle of big city hotel charges, miles and miles of dreary potholed roads that belong in some bleak dystopian urban blockbuster set in the 25th century, graceless warehouses and fields that grow rental cars. The goal was a visit to the Big Apple. 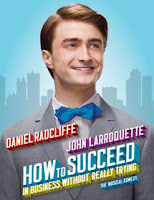 We headed out to Times Square one morning, armed with pre-reserved parking printouts. We had purchased tickets to watch one of Broadway's newest shows, a revival of the 60's musical 'How to Succeed in Business without Really Trying'. We knew next to nothing about it, except that this starred Daniel Radcliffe (of Harry Potter fame) in the lead role. It was a pick made by M and S, out of the smorgasbord of musicals populating Broadway. It was, we were all convinced, sure to be good.
The lobby rapidly filled up with people, about 1 hour away from the start of the show. A large lady dressed all in black, with gold beads and a fantastic flurry of feathers on her hat teetered in on 3 inch heels, accompanied by a gentleman in a beige jacket and matching fedora, with a muted ribbon and bow of its own. "My wife can't stand for too long.", he announced, perhaps hoping for an early entry into the main foyer. After a short whispered confabulation, the usher unlocked the door, slipped inside and brought out a small chair for the lady, who gratefully sank into its too-small cushion.
Half hour before the show, and the doors finally opened, letting in a horde of eager viewers, streaming up and down in search of their seats. We found ourselves perched precariously up in the stratospheric seats, which afforded a fairly decent view of the stage,  not so bad as to require opera-glasses to see the performers.
The orchestra struck up an opening fanfare, and the star of the show rose up onto the stage of a rope and pulley contraption. He was a window-washer reading the book on How to Succeed in Business without Really Trying, and proceeded, scene by scene to follow instructions gleaned from it as best as he could.
Lots of charm, colorful 60's era dresses and hair, dozens of dancers and singers on stage. It was quite the spectacle. Add to the fact that Daniel Radcliffe has a pretty decent singing voice, and does all his dance steps with great energy and enthusiasm, a nimble but diminutive contrast to the company boss, played by John Larroquette in his Broadway debut.  The audience, was rapt and applauded every number with much gusto.
Coming off the tail end of a nasty cold, I ended up with two coughing attacks during the performance, glared at by the tween in front, and hastily trotted down the stairs into a vacant ladies' room. "Are you all right?", asked a tall usher. "Nothing, just a cough attack, I will be fine." I missed two songs in the process, but when the entire show is filled with them, it probably didn't make for a huge loss. (And I now know why Hillary Clinton covered her mouth in this Situation Room photo. It wasn't an attack of nerves watching the 'Taking Out OBL' operation, she really was trying to prevent a cough attack.)
We didn't stay for long once the show ended, with a rousing song and dance number named Brotherhood, where J.B.Pierrepont Finch (Radcliffe) exhorts the bigwigs in the company to consider that the employees are its heart and soul, and cleverly winds up at the top of the pyramid, having been made Chairman of the Board. Not bad for a humble window-washer.
The doors opened out directly to the street, where a crowd milled around, hoping for a glimpse of the star of the evening. We hopped away to the nearest pastry shop for coffee and snacks before leaving on our long drive back to Pittsburgh.
Posted by Sujatha at 9:33 AM No comments: