Digitized perfect music leaving you cold, see why in my post up on Accidental Blogger.
Posted by Sujatha at 6:40 PM No comments:

The Winter that Wasn't

The snowdrop near my front door always shows up at the end of January. I like to think of this particular snowdrop  as 'January's fair- maid', not like Tennyson's 'February Fair-maid'.

It's quite nice to see the flower peeking up cheekily, even through the snow that sometimes covers it.

But this time, my January fair-maid decided to show up at the end of December, even before I left for my India trip, and had me wondering what that portended for a winter that hadn't quite got into its stride. 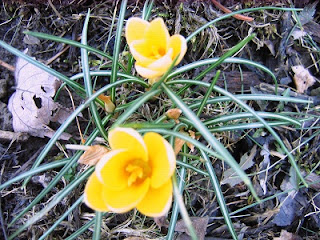 We are now in early March, and I saw the first crocuses, which normally show up in early April. My tulips and daffodils have been showing early activity as well. The tulips are putting out their shoots, while the daffodils have started budding.

The maple trees have started early on their buds.  I feel the effect on my nose, as tree pollen shows up earlier in the allergy forecasts. The moss has taken over the lawn in spots, the moderate temperatures and water-logged soil provide it with perfect conditions to overtake the few wisps of grass that remain.
We have had precious little snow this winter. There were a few desultory 2-inch days, but with a ground that never quite froze, nothing stayed on the ground for long, it seemed.
After having gotten used to significantly colder and snowier winters, this year seems like a respite, but there is a certain anxiety and restlessness. If winter just becomes an extended prelude to spring, without any of its usual attributes of extreme cold and frequent heavy snows, would it be winter any more?
It feels rather like listening to a melody, without the dramatic crescendos in the flow of the theme. There is no tension building up, and no relief as the theme descends from its not-so-high peak. All that we get is a faint sense of disappointment.
So this is the winter that wasn't, disappointing in many ways, perhaps a relief in others. If this is 'global warming' or climate change though,  I'm not sure that I'm all for it.