O give me a road,
Where the pot-bellied pigs roam,
Where the cars are just parked in a line,
Where they crawl every day
Down the slowest Parkway
Just under the Pigsburgh sign.

(to the tune of Home on the Range)

I join the morning crawl, on one of the US' slowest commutes, only bettered by knotty gnarls in New York city and Los Angeles- the dreaded Parkway West. 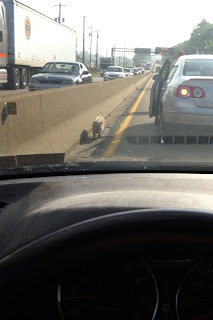 This morning seemed no different. I reached the midpoint from the Carnegie on-ramp around 8:05 am, top of Greentree Hill by 8:20, Fort Pitt tunnel by 8:42. A good and routine time, whiled away by practicing my singing, while trying not to spook the driver ahead of me by making faces that would be visible in her rearview mirror.
In doing so, I missed the drama unfolding behind me, the legend of the nattily attired Pot Bellied Pig who trotted down the 'fast' lane of the Parkway. A little pig, wearing a scarf, made its way onto the parkway, running past bemused observers, some of who got out to photograph the phenomenon.
This is one little pig, who lost its way from the market, and hopefully, made it all the way home. It scurried into the woods after some distance.
I guess that there is a silver lining to the slow crawl traffic on the Parkway every morning, otherwise the little pig would have been turned into bacon, rather than surviving its adventure by the hairs of its chinny-chin-chin.

Update: Not to be out done by a pig, a bull and a cow stopped the traffic on Route 28, today.
What's next, horses horsing around Route 19? At this rate, Pittsburgh should rename itself to Farmsburgh, given that the traffic is being tied up so frequently by domesticated animals.
Posted by Sujatha at 4:30 PM No comments:

The One that Got Away

We had gone on a school trip to a nature preserve last week. One of the highlights of the experience was for the kids to fish in the lovely lake, stocked with bass, bluegill and other types of sunfish.
M looked dubiously at the bamboo fishing rod she was handed. The sharp hook at the end gleamed in the sun. "Do I have to put the worm on?"
"I will", said her gym teacher, fishing out a fat nightcrawler from the bucket she held. She dextrously maneuvered it on to the hook, still wriggling a little. (Ouch, wouldn't that hurt? The internet is not much use in resolving the question of whether they feel pain- one site suggests no, because no organs associated with pain sensing are located in the very simple nervous system, another site suggests yes, because the worms are known to produce opioid substances which would serve no purpose other than pain relief. Well, at least this site offers a more reasoned discussion.)

Anyway, the worm was on the hook, and M trotted off to the dock, which was getting crowded with other kids trying to fish. A few minutes later, heeding the suggestion of a friend, M decided to move to another location, less congested, but requiring a mini-hike through the bushes, brambles and rocks. I followed, the better to keep an eye on the group.

At the slightly rickety dock, dipping in the middle, M wandered from point to point aimlessly, casting the rod again and again, in a sort of rotation with her friends doing the same thing. It's going to be a long hour, I concluded after 10 minutes of this. One of the other kid's moms also arrived at the dock around this time. Her daughter raised up her pole: "A big fish just came by and took the worm off my hook!", she complained.  M was in the vicinity, and I could see the big fish slithering around in the shallows. "Do you want to try and see if it will come to your bait?"

Not a few seconds later, M shrieked in surprise and lifted the rod out the water, struggling with the weight. "I caught him, I caught him!". The other mother came running to help her, while I struggled with the camera, trying to snap a shot of the moment. The fish was a good-sized one, with dark back and white belly, about 8-10 inches long at least, thrashing frantically. In no time, it dislodged from the hook and lay on the dock, continuing to thrash, while I caught a photo of a disbelieving M staring at the now vanished worm from the hook. 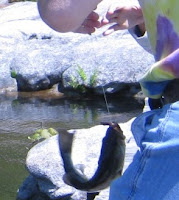 The fish flopped so hard that it practically propelled itself off the dock, with the other mom's hand helping it back, into the water where it belonged. All done with in the matter of a less than a minute.
"I think the fish scratched me!", pointing to a tiny red mark on the wrist,"Something on the spine may have done this."
"You may want to get an antiseptic cream to put on that", I suggested. She looked dubious and decided to lick it instead. "Saliva will do just fine."

M, meanwhile, hopped around screaming at her highest pitch "It was a demon fish, a demon fish. I tell ya!".
Back at the shed where we handed back the rods, we heard another similar story from another girl. Only, her mother hadn't been able to get a photo of the fish before that one got away.

'There's a moral in all this, girls', opined the teacher."You won't understand it now, but when you're older. Remember that men are like fish, they always get away."
Posted by Sujatha at 8:22 PM 2 comments: