A rather bad pun on 'Digvijayam' (loosely translated from Sanskrit, 'a tour of conquest'), undertaken by kings of old when they set out to subjugate rivals in all directions, also used to describe the countrywide tours of various sages as they visited to spread their teachings.

But here's the giant Rubber Ducky in person, marking the first stop on his U.S. tour in Pittsburgh. He came, he floated, he conquered... 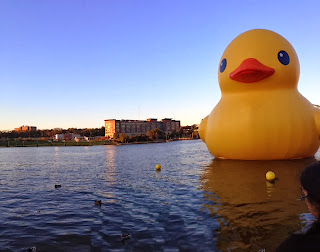 We paid our respects to the venerable teacher of quackiness, as he towered graciously over the numerous tinier ducks who waited for morsels of wisdom (perchance bread crumbs from visitors) in his vicinity. He silently withstood the photo-craziness of the mobs gathered to greet him, maintaining the same serene expression, like a true yogi immersed in contemplation.
He attracted an audience of thousands during his short stay, and more than a few who wished to retain him in the city forever. But the Giant Rubber Ducky is a free bird, and cannot be bound in a cage of Golden Triangles.
He left Pittsburgh's rivers this morning, and will soon be paying a visit to his next conquest early next year.

And in final tribute, a favorite rendition of the Rubber Ducky song from Sesame Street

Posted by Sujatha at 3:30 PM No comments: