Melody Floating in on the Breeze

My mother always loves to recount how I loved the song so much as a toddler, that it was among the earliest that I could lisp out in my baby voice, astounding my aunt who had to concede that yes, Suji was indeed singing that song, even as she had barely started to talk!

I had read accounts that said it was based on an older version of a Hindi song, rendered by the inimitable Juthika Roy, and later adapted to become the even more famous 'Kaatrinile', but internet searches to locate the original proved fruitless, until today.

The original version of 'Toot gayi man beena' was sung, not by Juthika Roy, but by a lesser-known but equally melodious Sheela Sarkar, as part of a private selection of songs. Here it is:

'Kaatrinile' is almost a complete lift of the original tune, with some minor changes in the orchestration, as can be seen below.

Does this make the copy less iconic? In my case, it is still the M.S. version which holds a spine-tingling charm, probably the result of it being associated with my earliest memories. But I remain grateful that the original version by Sheela Sarkar has finally seen the light of day and can be acknowledged as a lovely precursor.
Posted by Sujatha at 4:09 PM 5 comments:

What makes a veil so fascinating?

Is it the anticipation engendered in the viewer of the uncovering of mysteries? Is it the untutored charm of a baby waiting for the face to appear behind the hands in the game of peekaboo? What gives the hidden a power that trumps that of the seen? 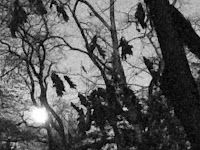 This morning, as I walked towards the last moon of autumn,  it wobbled large across the dark blue western sky, dropping behind a thin mantilla of tree lace, further dipping behind the burqa of the balsamic pine.

Now you see it, and now you don't.

Then, up again, brilliant, only to hide again behind a thin layer of cloud.