Suji waited desolately at the bus stop outside the school. She didn't have a watch to tell her how long she had waited, but the school bag was beginning to weigh heavier on her back and the sun inched lower in the sky. Why didn't the bus come? Or for that matter, why didn't she see any other buses? Could it be one of the sudden strikes that the French workers were famous for?

"I don't want to stand here. Let me try to walk home, I'm sure I could reach home before it starts to get too dark." Suji turned determinedly down the road and started trotting briskly, following the footpath, past the route that she usually watched from the bus window. Luckily, it was all mostly downhill.

She reached a small maze of roads and made a wrong turn. Looking at the high facades a bit uncertainly, she darted into the tiny storefront with the  'Coiffeur' sign and asked the man there, "Does this road  go down to the bridge?" "Yes," he replied, reassuringly enough. She pressed on, the heavy bag no longer weighing her down, now that she was back on the right path homeward.

The underpass to the Pont de St.Cloud came by soon enough. Suji watched cautiously for a break in the traffic and scooted through the dark little tunnel as fast as her legs could carry her. She emerged triumphantly on the other side, making it just in time to the sidewalk before a few cars started coming through, and turned around to see a Pedestrians Prohibited sign behind her. Oops. 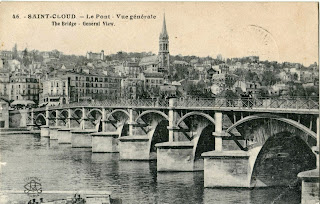 But the main hill was past. Suji waited patiently for the traffic lights at the intersection beyond the bridge, then crossing into the sidewalk of the large boulevard that led to one of the side roads where she would turn for home.  Just as she had almost reached the end of the boulevard, she saw Amma rushing up to meet her. "You walked! All that distance! I just found out about the sudden bus strike and was coming to try and get you from school."

P.S. The distance was about 3.5 km and took about an hour to walk.
Posted by Sujatha at 4:17 PM No comments:

The other morning I stepped out before sunrise. The skies were covered with a blanket of clouds, so I was disappointed not to see the familiar constellations, the triangle of Venus-Mars-Jupiter blazing in the east. I looked up at the leaf-lorn tree tops, and then just for a fraction of a second, Venus opened her eye in the clouds and winked at me. A little later, Sirius followed with the same benediction.
As I approached home, a strange white light streaked the eastern sky. How odd! It ought to have been a yellow light, portending the sunrise. The moon was still too early in its waxing phase to produce that kind of a light. What might this light be? And even as I watched it, it faded away back to grey nothingness.

This morning, I went out on the usual rounds. Not too many leaves remain on the trees, but the pear trees still show up with their greens barely starting to turn to red. The maples and oaks are done jettisoning their leaves, so colors have mostly turned from brown reds to brown and black. Except for the one tree that I saw, glittering with gems of red, orange and green, as the sunlight caught it exactly right. I was tempted to whip out my phone to capture the beauty of the moment. But the urge passed and I continued on my walk. The brightness of the sun hid behind a cloud, and the jewel-like beauty vanished.

I got home and opened up a page of Rumi who opines:
"Observe the wonders as they occur around you. Don't claim them. Feel the artistry moving through and be silent."

Wise words, and yet I infringe upon the advice, as I try to write of what I didn't feel like capturing in a photograph.
Posted by Sujatha at 8:19 AM 3 comments: