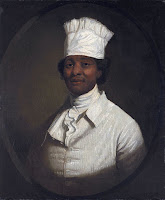 "Did you hear about the children's book that was pulled from the shelves because it depicted happy smiling slaves?", my husband asked me the other day. I admitted that I had seen some headlines in passing, but not read any of the reports in depth.
Well, I read them today, particularly this report . The article raises a pertinent question: "Should we whitewash (pardon the expression) history in order to make it less scary for young children to read about it?"
By some accounts, Hercules, the 'chef' of the Washingtons' residence at Mt.Vernon, was accorded many privileges (we shall see more about this strange word further) that were unthinkable at the time. A couple of pages from G.W.P.Custis's memoirs (Martha Washington's son from her earlier marriage) refer to him as a sort of King of the Kitchen, as tyrannical with the kitchen help as he was a celebrated cook, a true 'artiste', as culinary masters were called in those days. Custis refers to Hercules as a sort of well-heeled dandy, meticulous about his clothes, and being allowed to walk around fashionably in the street, able to buy all that his permitted selling of 'slops from the kitchen'  to the tune of $100-200 annually, a considerable amount of money for anyone in those times.

The Wikipedia link of Hercules' story tells a starker tale, rather than the cheerful episode portrayed in the book of Hercules baking a cake with the assistance of his daughter Delia. The story by Ramin Ganeshram is a fictional episode, filled with the cutesy voice of a young child to appeal to the young reader, and colorful illustrations to boot.  Ganeshram has done her best to inject the little troubling details about the realities of Hercules' slavery in author's notes and such, but the small print  is not likely to get the reader's attention. The review of the book in Amazon.com couldn't have put it better:


"Gr 1–3—A troubling depiction of American slavery. In a famous Philadelphia kitchen, chef Hercules prepares to make the perfect birthday cake for his master, President George Washington. When he discovers that there is no more sugar in the pantry, Hercules scrambles to find a suitable substitute, enlisting the help of the other slaves and servants. Based on the real figure of Hercules, who was owned by the first president and served as his chef, the story is told through the eyes of Hercules's young daughter, Delia, who describes her papa as a "general in the kitchen." The text explains that Hercules was one of Washington's most trusted slaves and was given more freedom than most; he could be seen in fine clothes walking the streets of Philadelphia or enjoying tickets to the theater. The story revolves around Hercules, Delia, and the other slaves finding a replacement for the sugar and carefully baking the cake. Brantley-Newton's colorful, cartoon-style double-page illustrations, combined with the light tone of the text, convey a feeling of joyfulness that contrasts starkly with the reality of slave life. One spread depicts dancing feet and the hems of fancy dresses and shoes of the white revelers at the very top of the page. Hercules, Delia, and the other slaves are seen in the kitchen below, smiling with glee as they work on the cake, evoking a strangely cheerful and exuberant scene reminiscent of a Disney film. Later, when Washington congratulates Hercules on a job well done, Hercules responds, "An honor and a privilege, sir." Young readers without sufficient background knowledge about the larger context of American slavery may come away with a dangerously rosy impression of the relationship between slaves and slave owners, and those with a deeper understanding are likely to find this depiction offensive. An appended note explains that Hercules was a real person, now thought of by some culinary historians as "the first celebrity chef in America." Ganeshram states that Hercules eventually escaped but that his children, including narrator Delia, were owned by Martha Washington and remained enslaved their entire lives. The somber facts recounted in small print at the end of the author's note are unfortunately not reflected in either the text or the illustrations of the story that precedes them. Adding insult to injury, the back matter concludes with a recipe for "Martha Washington's Great Cake," courtesy of the Mount Vernon Ladies Association. VERDICT A highly problematic work; not recommended.—Kiera Parrott, School Library Journal"

I was first inclined to think that the whole episode of 'banning the book' was much ado about nothing, but after looking through the images of the book and comparing it in my mind with the story drawn by the historical record on the Wikipedia page, I'm inclined to agree with the reviewer above.It is dangerously saccharine and simplistic in the way the characters are portrayed.
Real life for the slaves (or 'enslaved workers' as the tour guides prefer to use as description in the current house tours of Mt.Vernon, for some reason) was hard and/or worse. The constant reminders of the fact that they were owned body and soul by another human would not have made for genuine smiles of happiness. Occasional small joys and satisfactions of the daily grind could not have alleviated the very real lifelong unhappiness of 'being owned'. So the point being made by the story is pure fiction, even if it has a few historical characters and fine print detailing the historical realities.

Hercules lived a life of bondage, from start till the point when he ran away from the Washington estate in early 1797. A 'house slave' of some high status, when he was in his chef's heyday, but descending to the field labor in the winter of 1796, after his son Richmond was accused of stealing money from a white man and suspected by Washington of attempting to plot an escape. They were demoted, in a manner of speaking, to pounding stones, clearing weeds etc. (From Wiki link : "Historian Anna Coxe Toogood found Hercules and Richmond listed in the Mount Vernon farm records during the winter of 1796-97. They and other domestic servants were assigned as laborers, to pulverize stone, dig brick clay, and grub out honeysuckle.")


From an article in the New York Times, the real story of George Washington's slaves was not romantic, and was immeasurably harder than all soft-brushed pseudo-historical attempts to reconstruct the period. Delia continued through her life as a slave owned by Martha Washington and her descendants. Hercules himself succeeded in running away on Washington's 65th birthday, and that was truly a day that Hercules would have celebrated becoming a free man in his mind and body, no longer bound to utter silly platitudes similar to the one in the story book about being 'honored and privileged' to bake a birthday cake for the president.

Update:
The author Ramin Ganeshram complaining about her book being 'banned'