A Time to Rally-2

Much like 8 years ago, the email arrived in my inbox: campaign event in Pittsburgh on July 30, with Hillary Clinton and Tim Kaine. Should I RSVP or not? I remembered M, she might like to go. So I asked her and she was excited about the chance. I sent in the RSVP and received a simple confirmation email with the time and location.

Would we get good seats, how long might we have to wait in the queue, should we take food and water? How close to the speakers would we be? All questions running through my head yesterday.
We reached the venue, the David Lawrence Convention center, to find a long line that snaked all around the block. It looked like it was going to be at least an hour or more of waiting. M and I joined the line. We had not gotten too far when the 'entertainment' started. A large limo with waving flags and a sticker 'Women for Trump' circled past us. The plumpish older lady and her young son ahead of us yelled at the car "Show the taxes!". Shortly later, the lady in front started off on a Trump diatribe, listing his manifold sins, while I nodded sagely and smiled/laughed at appropriate intervals. Another protester walked by with a bizarre 'Hillary killed Harambe' sign, and a couple of people handed out some anti-LGBT end times style tracts. The Trump car circled twice and duty done, vanished.
And of course there were the badge peddlers and shirt-salespeople. A family group ahead of us got Marijuana leaf buttons for all the kids, which had me puzzled. Maybe it was their family's big 'issue', though I couldn't make out any connection the young age of the kids ( 1 preschooler and couple of grade schoolers).

Another group of Trump supporters closer to the entrance started shouting slogans as we reached that part of the line. Lady and son ahead of us "Show the taxes!" shut them up quite quickly. Did they not have a suitable rebuttal to that?

One and half hours later, we made it to the entrance and rode up the escalators to the ballroom where the rally was being held. "Sign up to volunteer", "Sign up for campaign updates", or even "Sorry, no umbrellas- Place your umbrellas there, and hopefully you be able to find them after the event." Next was security, with people examining the contents of purses, and a metal detector that uttered not a beep as M and I passed through it.


We entered the ballroom and were immediately horrified at the crush of bodies, more bodies and particularly annoying, very tall bodies who blocked any reasonable view of the stage, even if we stood on tippy toes. The event was supposed to start in an hour and M started griping immediately. I tried shifting this way and that, but it was obvious that this wasn't going to work. Over what seemed like a near eternity of 5 minutes, I asked M to snake forward, finding little gaps in the wall of people. We stood next to a couple with young kids and got lucky. A blue-shirted volunteer came forward to lead the family to the Promised Land of Less Crowd, and we followed in their wake and reached an uncrowded section of the hall, where, 'Hallelujah!',  we could see the podium from where Hillary would speak, and there was space, precious space, to sit down on the carpet if we needed.

One and half hours later, alternating sitting and waiting, and watching the cute little 3 year old (very well-behaved, and playing with his Ninja turtle figurines), the speeches finally started. From the organizers, from assorted city and union council people. The celebrity level started ramping up slowly. Senate candidate Katie McGinty gave a rousing speech, Braddock mayor Fetterman, who had been a strong Bernie supporter earlier, made the case for electing Hillary to the Bernie fans in the crowd. Congressman Doyle spoke, bashing Trump aplenty. Mark Cuban of Shark Tank fame...
M was thrilled, since she loves to watch Shark Tank. Cuban spoke of his childhood/school days and early career/failures in Pittsburgh. The crowd loved it and clapped prodigiously every time he inserted yet another Pittsburgh reference in his speech.Then he too started off on the enemy and awarded him the ultimate Pittsburgh insult of  'jagoff" (And no the term doesn't mean what you think it does. Check the link, I promise, it's safe and gives a good explanation.)

M spent her time fiddling with some game of her phone, texting a friend, watching kid play with Ninja turtles and handing them back to him when he dropped one, darting complaining looks at me and wondering out loud when a 'good speaker' would come. 'It's so boring, all these speeches!', until Mark Cuban made his appearance.

He finally segued into an announcement of the entry of the Clinton-Kaine duo, along with their spouses. Bill Clinton garnered an extra loud applause. Tim Kaine spoke briefly, a rehash of his introduction, a few folksy gut punches to the opponent and some likeable but not particularly memorable anecdote. He reminds you of the friendly next-door neighbor who can be relied upon to help out in times of need, general good guy vibes.

Hillary spoke next, veering from policy wonkish lines, to implicit condemnation of Trump's lack of temperament and qualifications for the job of president, to a couple of cute anecdotes. She's not a natural yet, and comfortingly that is the very thing that makes me want to trust what she is saying. It seems to show someone who is more concerned with results than the ability to convey inspiration to the public, of which we have had plenty these last  8 years. Not to say that Obama didn't have results, it is amazing what he has managed to get done, even amidst the push and tug of highly partisan politics.

Finally, speech over, the far end of the crowd started to melt away, while people closer to the candidates moved for a handshakes with Hillary. M wanted to see if she could get in for a closer look, but the crowd was too much to weave through, and Hillary was moving too quickly down the line for us to be able to reach there.

We stepped out, I located my umbrella with amazingly little difficulty among several thousand others, it being in exactly the spot where I had placed it. As we headed down the escalators, a trio of Cosplay characters from Star Wars posed for our photos, waving at M as she took a last photo of the day.

Quite a contrasting experience from the previous campaign experience with Hillary eight years ago, or tthe Obama rally in the Mellon Arena!


And now for the photos ( final photo credit : M) 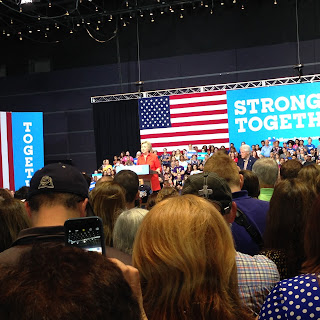 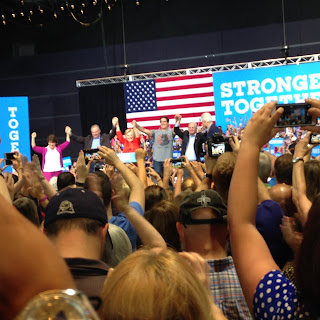 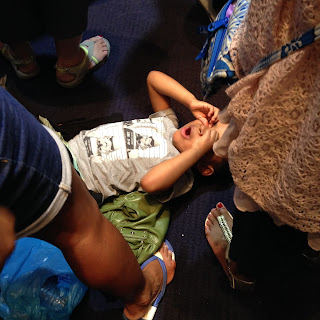 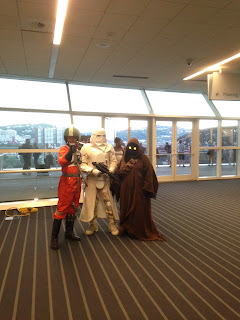 I know, it's an oft-overused pun. But this year I have been noticing it all the more. Now, reminded by this article written by my friend and erstwhile co-blogger Ruchira Paul at 3QuarksDaily, I venture to write of my own olfactory experiences this year, with a few photos to go with them.

Summer is the time of the scent of fresh cut grass, usually on those dry hot days when the lawnmowers will not get clogged up with wet intake. It's a dry green smell, if scents could have a color.

Then there is the wild honeysuckle that lines the paths of the walking trail near my house. I walked along it on weekends, with a group of friends who inhaled its fragrance and tried to identify the flowers. 'Lilac' suggested one, 'No, no, it's called something else.' said another. "Why don't you take a photo and do a reverse image search?" I suggested. "Good idea, I'll try that."
The next week, I asked her whether she was able to find it, but she said it was a fruitless search, as she had photographed it at the wrong angle. I pulled out my phone and took a wild guess- 'Honeysuckle." and there it was, the exact flower that I had photographed. 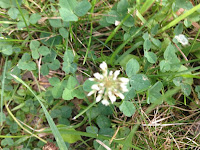 As the early summer warmth gives way to mid-summer heat and thunderstorms, there's a new odor along with that of dried grass and mulch baking. It's a sweet smell which I identified only around specific patches of grass, home to no more than a few hundred clover plants, humming with bees and the preferred haunt of wild jackrabbits. These are the small unspectacular white clovers, not as pretty as their pink larger cousins, but infinitely more fragrant in groupings.

And of course the pretty-in-pink one, which is spectacular, but doesn't grow in groupings large enough to generate quite the same fragrance. 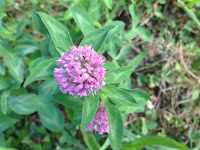 At one point during the walk, I detected a slightly different fragrance than the clover, near the house which is haven to a group of turkeys in the backyard. There was a small shrub by the mailbox with white flowers that seemed to be the source of the scent. I bent down and sniffed, and there it was. I have no idea what shrub this is, so I took a photo of the flowers, naturally. But Google failed me on this one, the reverse image search just turning up a gazillion white flowers that bore no resemblance to the flowers. So here is the photo. If you are able to identify, dear reader, please leave a comment below with the name of the plant. The flowers were approximately an inch in diameter, for a sense of the scale in the photo. 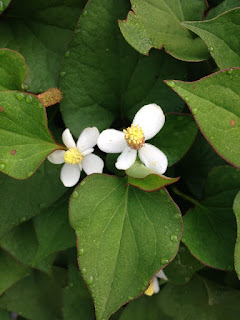 I would be remiss if I didn't mention my Home Depot-purchased jasmine plant from several years ago. It never fails to put out a multitude of fragrant white blooms in the heat of the summer, and this year is no exception. Nothing like the whiff of jasmine to bring back memories of India!

And finally, just for fun, and a splash of color after all that white, here are unfragrant but lovely denizens of my yard, including a delicate but beautiful mushroom which may very well have served as parasol design inspiration, and a Behren's silverspot butterfly feeding on the coneflower (endangered visitor, from what I gathered).