In the years past, we had gotten accustomed to seeing a groundhog wander the far end of our lot, munching on assorted wildflowers in the neighbor's  and our unmanicured lawns. It would occasionally slip under our low deck, and I would try to go out and stomp around a bit, having read somewhere that groundhogs dislike noise. I was trying to discourage it from settling there, even if it rarely amounted to more than a half-hearted attempt to scare it away. I feared for my kitchen garden, convinced that it was responsible for some of the eaten up plants, until I once caught a chipmunk nibbling on those.
As this spring moved into summer, with little ado, and a great many thunderstorms, we noticed a new denizen on the lawn patch. Or two, really. A small ratlike figure, and another. Two baby groundhogs, one slightly smaller than the other.
But where was the mother? Was that the groundhog that I had tried to scare away last year? My husband reported seeing a dead groundhog further up the hill, precariously close to the road's edge- maybe it was the mother, and her luck had run out. So she had probably left two orphaned babies.
Late every morning, the two would venture out for a round of munching clover, and vanish back under the deck sometime later. This continued for several weeks until the two stopped coming.
Maybe they had moved to fresh feeding grounds, or closer to water, I thought.
Late summer, and just as our chili plants were beginning to flower, they were bitten down to the bare stems.  Shocking but not unexpected, especially with no fence to guard them from any local wildlife. The next day, keeping a sharp eye out for possible culprits, it was the Return of the Groundhog. One of the two had come back to his or her old feeding grounds, and promptly settled in the old homestead under our deck.
And the battle for the beans and chilis began in earnest. I would try to jump out and scare the
groundhog away, the moment I spotted its nose peeking through the deck railings. It would dig a deeper exit hole from under the deck, which I promptly tried to block with assorted heavy pots.I moved the chili plants in, it would try to munch on the bean leaves instead, or the okra.
Summer's end, and having harvested as several handfuls of beans, a few pitiful tomatoes, an abundance of basil, and zero okra or chilis, I would watch as the groundhog came out in the afternoons of the longish and unseasonably (for September) warm days, not bother to go out and chase it away.
The groundhog had grown fat and was building up the blubber to survive the winter.
So, till next year, Groundhog, and let the war resume next spring.
Posted by Sujatha at 4:17 PM No comments:

It started early this spring. Tiny cheeps emanated from the chimney as we sat watching TV and eating our dinners.
'Oh, we have a bird's nest in the chimney! What should we do about it?"
"Just leave it be. The babies will eventually grow and fly away."
So we sat, each evening, listening to the tiny peeps and cheeps.
Mid-summer, and the sound started getting louder and more raucous. It got so bad that we had to bang on the old railway tie that serves as a mantelpiece over the fireplace. That seemed to command their attention and quiet for a few minutes. Then the chittering would start all over again.
M texted me in a panic one evening, when we had gone somewhere, leaving her to her own devices, since she didn't want to come with us. "The birds in the chimney are making a huge racket. It sounds really scary, what should I do?"
I didn't have much advice for her, beyond the usual suggestion to bang on the mantelpiece. Predictably, it failed to work for longer than a few minutes.
A few weeks later, and we no longer cared to listen for the ever-present chitters and cheeps, figuring that this year's brood was just taking a longer than average time to fledge. We were busy too, getting ready to pack M off to her new dorm at her university.
Finally, the big day came. We loaded up the van with suitcases, mini-fridge, microwave, etc. and spent a good part of the morning setting up M's room. After lunch, we left her to acclimatize to her new space, and came home tired in the evening.
That evening as we put on the TV, there was something missing. The loud chorus of cheeps, that always accompanied the sound of the talking heads on TV, was gone. The birds had fledged, and the nest was empty.
The chimney swifts, just like M, were gone with the summer.

Posted by Sujatha at 4:20 PM No comments: 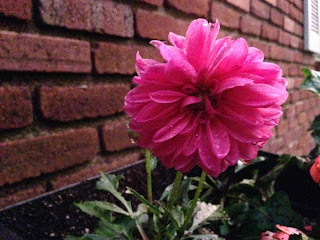 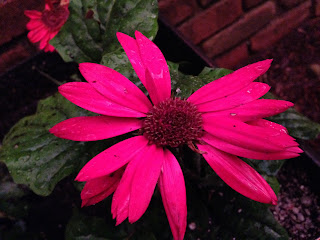 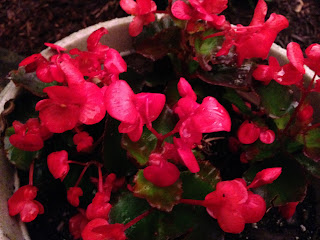 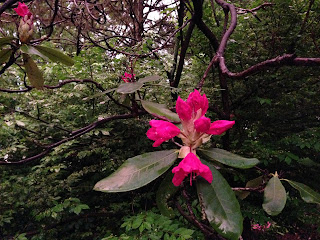 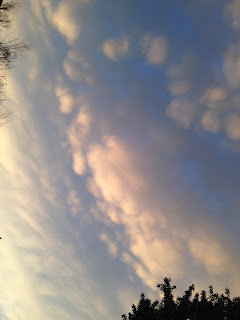 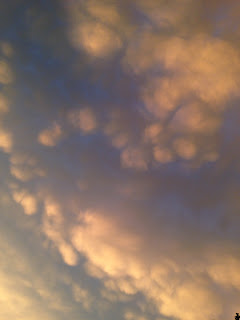 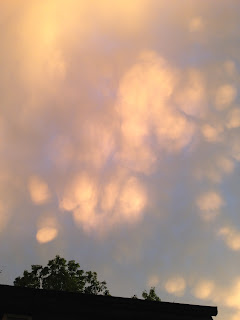 It was a stormy afternoon. Rain poured down in sheets from as the threatening dark clouds passed over the neighborhood. When the rain stopped, the whole place was bathed in a strange yellow light, that drew me outside in an attempt to capture its strange effects. The flowers appeared a hyper pink in this light, and looking up, there was a literal garland of pearls in the skies, beyond beautiful mammatous cloud formations.

Posted by Sujatha at 5:17 PM No comments: