Definition of luck (From the Merriam-Webster online dictionary)


1a : a force that brings good fortune or adversity Luck was a big factor in the outcome.


b : the events or circumstances that operate for or against an individual The loser muttered something about bad luck.


A couple of months ago, I went on a long-planned trip to the Hawaiian islands with my husband. We had a wonderful time, taking the opportunity to hike and see its many beauties. One place that we visited was on the southern side of the Big Island of Hawaii, a place which was marked 'Black Sand Beach' in one of the ubiquitous tourist maps.
We drove towards the location on a picturesque winding residential street, bearing the grand name of  "Highway", according to the map. Except that this was more like a one-and-a-half lane road. We had to carefully maneuver our huge Jeep (rented for its four-wheel drive capacity) around construction equipment near a house, and the 'scenic highway' seemed not so scenic, after all.
"The beach is this way," as we drove further down the road, and it suddenly burst upon us. An unforgiving mass of solidified ropelike black lava, and a few hundred feet away, the ocean waves pounding insistently on the rocks. We had just happened upon what used to be the famed black sand beach of Kaimu, which was now vanished under lava outflow from a volcanic eruption in the 90's.
Driving further on, we reached a circle and tiny parking lot, surrounded by thatched stalls with miscellaneous crafts on sale, a pub and a country store. I wasn't in any mood for shopping. "Where is the beach?"
"I don't see any signs to where it might be, let's just head back." After all the scenic points we had viewed, we figured there was always another pretty sight to be seen a few miles further on the road.
So, we turned back and had a sudden brain-wave. Didn't the ropey Pahoehoe lava rock of the erstwhile beach look fabulous! We parked the jeep on the roadside, close to a fruit juice stand, and took a few photos against the backdrop. 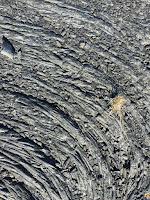 I had earlier not attempted to pick any lava rock, but the few little pieces where I stood were irresistible, gleaming with a blue-green glassy charm where the rocks had sheared into smaller pieces. I bent down and picked up three rocks, wrapping them in tissue and carefully placing them in my capacious handbag. I was sure that I wasn't breaking any rules here, there were no signs prohibiting removal of rocks, unlike the Volcanoes National Park, where clear signs listed the prohibition against taking rocks as souvenirs.
Once back at home, I admired the little rocks, placing them carefully in my curio cabinet along with other miscellaneous souvenirs. I showed them off with pride to another friend who visited, who exclaimed "Amazing, we didn't dare pick any rocks from the Volcanoes National Park, when we visited." After she left, I looked it up, and came across sad bad luck stories of people who had dared to bring back lava rocks from the park. " I lost my job...I lost my girlfriend...I was audited by the IRS...etc., etc. ", all because of having brought back lava rocks from a trip to Hawaii, enraging the goddess Pele who considers all the rocks to be her children, in a way.
Was I courting really bad luck when I brought those little rocks home? I thought about it, and decided that I didn't want to find out the hard way. I procured a bubble wrap envelope, deposited the rocks carefully in a little box with a note to "Dear Reader", and requested that they return the rock to the beach where I took them from, with the approximate location, and mailed it with no return address to a small store near the beach in the town of Pahoa. And, heaved a giant sigh of relief that Pele's children were returned to her. At least, I presume that the people at the store that I sent them to were kind enough to return them to the beach. At worst, if they tossed the rocks out the window, the rocks would still be landing in the vicinity of where they needed to be.

The new manager at my office brought in a King cake, an Easter tradition, he said. He offered me a piece, handing me a plastic knife. I cut carefully into it, and promptly felt a hard object in the way. "Congratulations, you found the King baby! That means good luck for the year, and you get to bring next year's King cake- Well not really, it doesn't have to apply to you" he proclaimed with a grin, probably a concession for my not being a Catholic.
"I'll definitely bring a King cake next year!" I declared gamely.
The King cake is a Mardi Gras tradition, and the person who finds the baby or bean (fava beans are also used) is guaranteed good luck and prosperity for the year, and of course, is tasked with bringing the next year's King cake.
I have my King baby in a place of honor, as one can't be too careful with the harbinger of good luck, and am readying my plans for baking a King cake next year.


Update on the King Cake

Posted by Sujatha at 2:38 PM No comments: