This is the year that my husband decided to try out his hand at gardening, with the community garden plots in our township. He cadged a section of a plot from a friend who had been reserving the plots for a few years (these are so much in demand that there's a waiting list for vacancies!).
I did mention the perils of overspending, notably the case of the $64 tomato (read the book, it's both hilarious and illuminating to the beginning gardener), and Hubby promptly said he was going to go with a low budget, low labor approach (not sure how that was going to work out, without at least some physical labor).
So we traipsed down to the plot, one among about 60 other large lots (20x10ft) on a sunny hill. More ambitious and experienced gardeners had neatly fenced off their lots, brought in tons of soil amendments, watering contraptions (there were no water supplies, or taps in the vicinity, everyone had to bring their own). Others had already started planting early crops, with neat mounds of amended soil.
The lot we were going to garden on stood, yellow clay and coarsely tilled (a basic spring tilling was provided by the township.), not the easy for seeds potting mix soil that I was used to seeing near home to be used in gardening flats.  I wondered at what would grow in what appeared to be inhospitable clumps of clay. My husband had more faith than me. He patiently laid down a few yards of weedblock fabric, weighted down with rocks, cut open a few holes and planted some tomato seedlings that we had started indoors in preparation for the big plot.
The sun beat down on the tender seedlings all day long. When he went back the next evening to check on the tomatoes, they were sad withered sticks. Disappointed, but undeterred, he planted bush beans  and zucchini seeds directly in the clayey soil, watering them with a couple of milk jugs filled with water.
For the next few weeks, rain was plentiful, due to the late spring thunderstorms, he didn't have to go and water them daily. 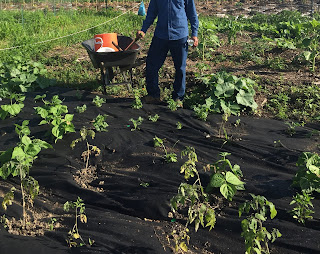 I started my little home garden again, planting a couple of Walmart tomato seedlings ($2.50 apiece), and a couple of started-from-seed tomato seedlings, kale and basil, as well as a few beans and cucumber seeds. No fence this time though. It was all going to be at the mercy of the deer, rabbits and groundhogs in the vicinity.
A few weeks went by, and the bean plants were growing apace, with the plentiful sunlight and rain. Our friend's section was burgeoning with tomato plants, butternut squash, corn stalks. The section we planted now had sizeable bean plants, and the zucchinis were coming along just fine.
All we had to do was check on the plants periodically, and wait...and wait...

How did the garden grow? We are (hopefully) going to have an early Spring. The snow is starting to melt away in the lawn, and unless we get an unexpected snowfall, it will soon be be time to clean the brush and weed and do summery things..

Hi Lekhni, so nice to hear from you after a long break! The garden grew very well indeed. I will post a sequel to this, had been putting it off for one reason or another.

I know, I hadn't realized how long it had been since I read your blog (or any blog for that matter)..