One afternoon, a few days ago, there was a heavy thunderstorm. Small bits of grape-sized hail pelted the wooden deck behind our house. I walked into the kitchen to get a cup of coffee.
"Freeze", said my husband, standing at the sink. "Go round to the other window, and you will see what I am seeing here. It's huge!"
I peered into the other window, and there was a huge hawk sitting on the little gate we had that led to steps from the deck. It sat unmoving in the heavy rain pelting down, didn't seem to be in any kind of hurry to be flying off.
I ran to get my phone and managed to get a few photos and video of it, before it decided the gate's swaying in the wind annoyed it and swooped off.
Looking up the markings in my Sibley field guide, it appeared to most closely match with the picture of the Juvenile Cooper's Hawk, which is considered an uncommon bird in these parts.  I was delighted to have this close encounter with the avian visitor, who, no doubt, had been hanging around in hopes of preying on smaller birds that like to visit our bird feeder, before it got caught in the thunderstorm.

On this morning's walk, there were no stars to watch in a clouded sky, nor earthworms to watch out for on dry roads. Signs of the dawn chorus have started though, relatively early in the year, with the warmer temperatures and blossoming trees. Today I heard an owl close to my home. "Hoo Hoo-hoo Hoo, Hoo!", it called insistently again and again.  A little while later, a counterpoint arose, a lighter owl voice calling out "Hoo Hoo-hoo, Hoo, Hoo!"
Another owl, what a surprise!

I stopped for a moment to record the call, and heard a third owl chip in to this duet. I wonder what they were talking about.

Take a listen to owls and other birds of spring by clicking on the link below.

After a few days of incessant clouds and rain, early this morning the skies cleared enough for the gorgeousness of the spring constellations to be visible.

I took the precaution of downloading a constellation app on my phone, not wanting to struggle to identify individual star names which I had long forgotten. Antares, Arcturus, Deneb, Altair, Vega...
To the south-east,  a loop of three bright planets. Venus or Jupiter, I wondered. I tapped open the phone app, and it confirmed that  I was looking at Jupiter, a noticeably more orange than red Mars, and Saturn.

The Big Dipper was overhead, with patchy cloud around it. I continued walking uphill to the highest point in my neighborhood, and then froze as I saw a stream of lights moving in a line, from Arcturus towards Vega. The moving lights continued, on and on for a good couple of minutes. My glasses were fogging up from my breath, and I removed them for a few seconds, still watching the now-blurry moving lights, not quite sure of what they might be.

High altitude aircraft? Drones? Perchance, even UFOs, aliens come to save earthlings from the follies of the coronavirus pandemic?

I pulled out my phone to see if I could capture the movement, but the optics weren't powerful enough to get a good image of the moving lights. The screen just seemed to capture unrelieved blackness. I popped the phone back into my pocket, and continued my walk under the starry skies, admiring the steady shine of the three planets whenever my direction took me towards them.

Coming back into the house, it struck me that what I saw might have been a sequence of linked satellites, so I googled those to find that what I seen was the Starlink Satellites, launched in December last year and January this year.

Astronomical mystery of the necklace of lights solved!
Posted by Sujatha at 8:56 AM No comments:

Having been the lucky recipient of the King Baby from the cake that my manager brought into the office last year, I was obligated to bring a King cake this year.
I dutifully set my reminder for the date, and started scouring the internet for a suitable recipe to make at home. First stop, an elaborate concoction for the authentic version of the King cake, which seemed like too much work.
Next, an easier version that relied on purchased cinnamon pastry dough, and a few bottles or tubes of food coloring. But the recipe was not only easy, but had more than a few unsatisfied reviewers.
Next, the online search for a bakery that sold the authentic version nearby. Don't we have enough specialty bakeries that would carry that? Alas, the closest specialty bakery didn't list them on their website. I didn't want to take a chance on not finding one if I went there.
More searching, and at last, a few answers on some internet forum. 'Giant Eagle' has them. Or 'Shop n' Save', chimed in another user. I cheered up considerably, and put it on the grocery list for my next shopping expedition. I could always try the cinnamon pastry version if that didn't work out.
Sure enough, there were about a dozen King cakes right up in the front when I went there. The only wrinkle, for the very reasonably priced and delicious looking cake, was that this plastic King baby was huge in comparison with my King baby from last year, and was taped to the plastic container, not baked into the cake, as had been the case earlier.
The cashier glared at me as I asked her the obvious question about how to go about getting the baby into the cake "Maybe make a hole and put it in?" she suggested, rather gingerly.
So that's what I did, pushing it in carefully from under the cake after making a hole with a butter knife.
Mardi Gras day arrived, and I carried it triumphantly to the office, placed it in the common conference area, and sent out a group email "Come one, come all! Try your luck at getting the piece of cake with the King baby!" to paraphrase my more formal 'officialese' email.
I had even provided utensils, and plates, along with purple napkins to make it easier for the hungry hordes.  An hour later, I peeked at it to see how much was left. About 3/4 of it was gone, except for the large section of green frosted cake which harbored the King baby. People were avoiding Mr.Luck!
As it turns out, the King baby is viewed by my colleagues, not as the harbinger of good luck, but the annoyance of having to bring next year's King cake. So much for the tradition being upheld, of happily accepting the King baby, and bringing next year's cake!
The final piece with the King baby still lay forlorn and unclaimed as I left work. The next morning it had vanished, who knows where!

As for next year's King cake, will we even get one? It's all up in the air now...

Posted by Sujatha at 1:55 PM No comments:

The Worm Moon played hide-and-seek with fluffy patches of cloud, as I continued down the road. Why is this called the Worm Moon, I wondered. It was quite chill that morning, so I had bundled up with my favorite scarf and walking coat( a much loved corduroy which had frayed so much near the pockets that I sewed a decorative scrap to conceal them, rather than discard it).
Elsewhere, stars shone sharply in clear areas of sky. The head of the Scorpion glittered to one side, the Swan and the Big Dipper elsewhere. I trudged along, head turned skyward.
The roads are always empty at this time, and once I get off the arterial ways, there are no cars to interfere with my attention to the sky.
A week later, and my morning walk turned into a gambling game with the rain clouds. "Will you pour on me, or won't you?" I stepped out in one such gap between the rains and headed up the smooth black asphalt that lines streets in my neighborhood.
There was no point in looking at the sky, so I looked down at the glistening wet road. Little thin, long streaks lined the road. Earthworms, traveling across, trying to get from the grass on one side to the other. Or, earthworms, following long established paths of their ancestors, just moving over the roads that were built over the earlier pathways of soil and untouched forest.
The moon was a banana crescent, with Jupiter and Saturn glittering nearby. Or maybe turning into a worm, a fat one.

Posted by Sujatha at 8:04 AM No comments:

A few weeks (maybe 4 or 5, I don't quite remember), my husband came back home all excited. "Time to go pick beans!" he said, beaming. We drove off the community garden with a large green bowl for the produce.
I had luckily thought to take a floppy sunhat, and we trudged through tall weeds lining the path to the plot. A quick glance at the plants showed us that there were beans and more beans, a few zucchinis starting to grow, and bountiful butternut squashes on our friend's side of the plot, along with towering corn and man-size tomato plants. 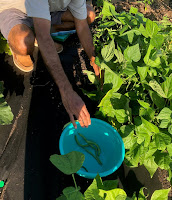 Picking beans was hard work, you have to squat down, lift up each plant gently and check under all leaves, carefully snapping each bean from its stem. Even though we had only a baker's dozen of those, it took me a full half hour to remove all the larger beans from them. I started to feel a new appreciation for those unnamed laborers who picked the masses of supermarket beans that I routinely buy. All that work, and probably not for much pay either!
A few weeks later, disaster struck the bean plants, in the form of the yellow Mexican jumping beetle. They ate the leaves right down to the lacy veins, and the plants stopped producing. But by then, we had already picked ample beans (about 10 lbs) from those, we were fortunate to have started the plants early enough that we had already harvested a decent amount from them. We just pulled out the plants and scrapped them in a nearby lot.
In the weeks that followed, other garden bounty included four humongous but surprisingly easy to cook zucchini( we gave away 2), large bunches of kale. Our friend chipped in with giving us a couple of butternut squashes and lots of end-of-season cherry tomatoes.
My little home garden produced a respectable amount of tomatoes, around 2 lbs, of which I gave away some to friends, slowly ripened and used up the rest. A chili plant that I had wintered indoors and set outside in the summer actually came back to life and produced a handful of fairly spicy chilis, so I was happy that I had managed to save it from the local groundhog last year. My husband also tried planting radishes in another sunny spot, and we feasted on some red radishes and greens with definitely more 'bite' in their flavor than the large bland ones we got from the grocery stores.
So another year of gardening is set to start soon, we will no doubt try some old favorites and maybe a new variety or two, maybe even some Indian vegetable favorites like bitter gourd (if I can get my hands on some certified seeds)
Can't wait for spring to get started on some seedlings! 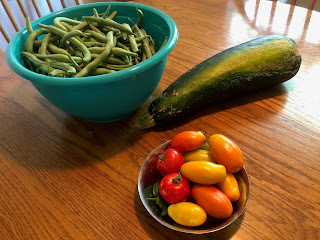