A few days ago, the 'Kek-kek-kek' of the grackle family was in high gear, while the parent grackles picked out choice insects from the grass, feeding it to a little fledgling that was yet to fend totally for itself. They often do this fairly close to the flower bed under the fringetree near our deck.

I peered out at the deck, and noticed a smallish bird carefully hopping along the lower railing of the deck's fence. It was brown black with a darker beak, and looked like a baby bird of some kind. It reached the end of the railing it was on, peered at the perilous four inch hop to the deck, summoned up its courage, and made the jump.

Whew, it landed correctly, on its feet!

A few seconds later, Papa arrived, a mourning dove with pinkish red feathers on the breast, landing about a foot away from Baby. He kept a slight distance from the fledgling, not going up close, or attempting to feed it. He walked away, leading toward the flower bed on the other side.

The baby mourning dove slowly followed him, and made a second perilous(not) leap to the flower bed from the deck. They spent some time pecking for insects.

A little while later, as the baby continued its attempts to find food, it passed too close to a Northern flicker in the same grass patch. I watched in horror through the glass as the flicker tried to peck at the fledgling, opening the sliding door to the deck with its loud squeak in an attempt to rush out. 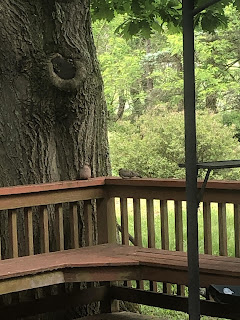 By the time I stepped out, all the birds had flown off. The fledgling was nowhere to be seen. I hoped that it had not been injured, but couldn't be sure until an hour later when I saw it again, this time on a tree stump further away.
Unflighted dove fledglings are made to leave the nest by the parents after around 13 days past hatching.  They must stay groundbound for a few days, with nothing but general instruction from their parents (not food, which they must learn to find for themselves).

In the meantime, they must also evade predators which include other birds, some rodents, and wandering cats, in order to make it to the next stage of juvenile mourning dove.

A peril fraught existence indeed!
Posted by Sujatha at 9:54 AM