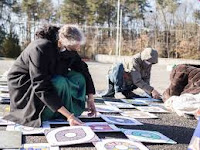 Well, it's not really a mania, I guess. In order 'to honor Vice President Kamala Harris' Indian heritage', a group of Indian-American ladies decided to come up with a 'kolam' based art installation to be placed on the Mall in Washington D.C.

Placing 1800 cardboard colored tiles is probably a lot easier in the winter cold, than it would have been for all these ladies to have indulged in the real 'kolam' making thing. In addition, it has the advantage of getting a large group of youngsters involved in the project, albeit from a distance, pulling together the strands of many other art forms and newer artistic crazes such as Zentangle as though they were individual pieces of a quilt to be sewn together.

It has been quite the thing in India for many years for large groups of ladies to do kolams at temples, such as in the Madurai Meenakshi temple. I'm sure that many other similar large temples have similar activities planned for auspicious times, such as during the Navaratri festival. But the logistics have changed, even if the basic patterns haven't. The ladies at the Meenakshi temple use paint, in order to give the huge kolam a semi-permanency of sorts, even as thousands of worshippers walk over it over the next several months, before the old one is painted over and a new one put in place. 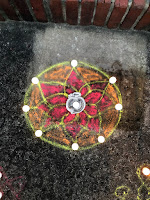 The recent warmer autumn prompted me to try using colored sands to create a kolam outside my doorstep for the first time in many years. I just felt like doing it on Karthigai last November, and added numerous little LED tealights that looked really pretty in the deepening dusk. The kolam was less of a kolam and more of a kolam-rangoli hybrid, given that I didn't have the traditional white-stone kolam powder, which I would have much preferred. The colored sand didn't flow as smoothly between the fingers, and led to a coarser finish. Neither did the rough concrete near the entryway cooperate with achieving a thick line and quick fill in of color. Add aching joints in colder weather and the amount of bending and squatting required, and you can easily see why this is not about to be repeated by me anytime soon. But it was still worth the try, for the good old memories.

During Pongal, at my grandmother's house in the village, I recall waking up early to help my mother and grandmother, as they set up clay stoves to be fed with dried palm leaves and cow dung patties, while the rice simmered in huge pots for the pongal. Before all this could start, there was the incessant cleaning of the courtyard, when my mother and a few other ladies would begin the work of drawing the kolams. I might have helped with a few tiny ones that I could manage in a few spots. It was a huge time-consuming undertaking, all supervised with the eagle eye and sharp tongue of my grandmother.

Back home in the city, with a mosaic floor outside our flat, there was no suitable space for a kolam. In later years, once we moved to our own house, there was  the cement pad in front of the doorsteps, always with a fresh kolam, simple ones for every day, and more elaborate ones on festivals and special occasions.

Now, in the US, I do them on paper, or electronic slate or tablet.It may be creatively satisfying, but there is still not the fulfilment brought by the full-body work out of bending over, moving in a circular line around the floor, feeling the powder run between the fingers, controlling the line of the kolam,  drawing segment after segment joining into one long harmonious infinity.

My favorites are the 'sikku kolams', which start off with a framework of dots, and are encased in single strands that twirl around them in intersecting patterns, till the line finally rejoins its starting point. These days, I can recall only a handful of designs that I can draw from memory. The larger ones never established themselves in my brain, since I never tried to draw them on the ground, only on paper.

Kolam is simply, as one of the many meanings of the word in Tamil, Beauty itself, worn out everyday in the humdrum of daily life, and renewed afresh every morning.