But where are you from?

I often get asked where I am from, and routinely state 'Pittsburgh, Pennsylvania', until the question becomes 'Where are you originally from?', when I state "India". Yet the conversation with the 'Where are you from' that sticks in my memory is the following one at the local Indian grocery from some years ago.

Cashier: "Where are you from?"

Me: "Pittsburgh, of course"

Cashier: "No, no, where are you from in India?"

Cashier, looking at my name on the credit card to ring up the sale : "Aha, you must be from Bangalore, with a name like that"

Me: Sails out with a mysterious smile that could mean "Yes, you are right", or "No, you really have no idea."

Posted by Sujatha at 8:45 PM No comments:

Not So Rare Bird

I have always wanted to catch sight of a rare bird, but as it turns out, the 'rara avis' that I find, invariably have turned out to be listed as species of LC (Least Concern) when I look them up on the usual birding websites.

The rarity is in the state of mind that I reach, I guess.

Near the deck, a week ago, I was able to capture video  of the bright red cap of a large pileated woodpecker, which usually hangs out in more forested areas than the suburban backyards here. The bird is pretty large, about 16" or so. It flew about the deck, inspected a pine stump in the neighbor's yard, and flew off. These woodpeckers apparently like to drum on old tree stumps, to carve out their nests, but the stump didn't meet the exacting qualifications, I suppose. 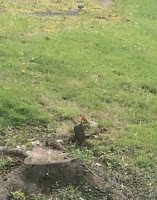 A few days ago, the flash of blue wings. Not a blue jay, insisted my husband, as we walked away from the main trail in the park. It was definitely smaller. Luckily, it flew to the branch of a spruce tree, and I was able to take a blurred photo of a small bird with a blue head and orangish breast. Eastern bluebirds, as I learnt later, are not uncommon in wooded settings. It was a bit of thrill to have spotted one, though.

Yesterday, walking around the neighborhood, past the sour cherry tree in our yard, there it was, a tiny nest, nestled in the fork of a branch, with a low-key robin's head. I stood some distance away, and took a quick photo. Maybe it is still there, must go and check later

Update:
The robin is still there, flew off with an indignant chirp when I moved a little too close for a photo, and decided to grab a worm snack while it was ‘off duty’ for a bit. All that egg warming in the still-cold early morning must have been tiring! 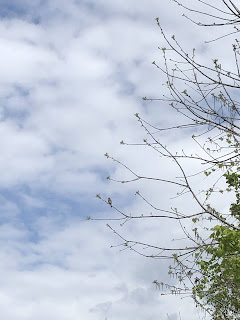 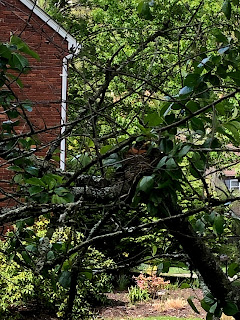 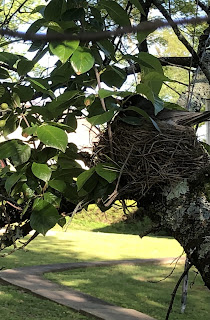